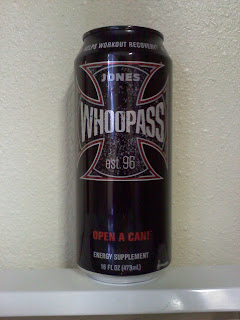 Given the devoted (almost cultic) clientele that the Jones Soda Company has, I would think that Whoopass could be found in more locations—say, everywhere Jones sodas are sold—than it actually is.  Not so—coming by it is actually quite a challenge.  If you’re a Jones fanatic or are particularly desperate to get your hands on it, I’d get online and buy a case.

The Whoopass can reminds me of the Spike Hardcore Energy can in that it says quite a bit without actually saying much at all—it’s not particularly flashy or ostentatious (simply a black can with an iron cross with the name of the drink written within), but just by that, you get the impression that this is a drink that this means serious business.  Now that I’ve got that impression in my mind, let’s see if Whoopass delivers….

Whoopass is definitely unique—which is gratifying; I’d have been really pissed if the Jones Soda Company had put out an energy drink that turned out to be a Red Bull clone…it just wouldn’t have jived with the whole Jones Soda principle.  The taste was that of a sour red apple, but with a hint of cherry—at least that’s what I got out of it.  I actually fairly enjoyed the effect; my only complaint was a hint of bitterness that actually tasted that it came from that apple flavor rather than the caffeine and other energy ingredients.  Anyway, it was enough to dock half a point or so, but not enough that I am unable to say that this is a drink to please Jones Soda fanatics and energy drinkers alike—because it most definitely is.

This is an intense drink—it really does meet the expectations that the packaging sets.  It hits quick and it hits hard, delivering exceptional alertness and enough jitters to please just about anyone.

What Whoopass dishes out lasted a good while—four hours, give or take 15 minutes.  The one thing I hold against it is the crash afterwards—it’s big, like somebody’s whooped your…well, you know.

Just as Jones cranks out a dang good soda, they’ve cranked out a dang good energy drink.  I like the taste, I like the kick, and the only bad thing I have to say about it is that you crash pretty hard after the fact.  Don’t let that deter you, though—follow the slogan  and open a can as soon as you can get your hands on one!