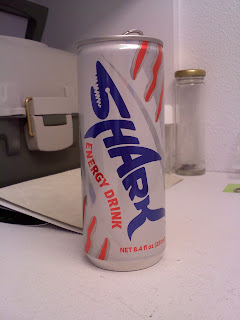 I found this at a grocery outlet store in Twin Falls for $.50.  I had never seen or heard of it before, and haven’t seen it since. 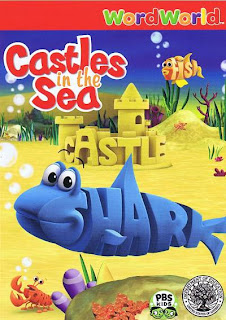 You know what?  I’m just going to refrain from commenting on Shark here.  Why?  Well, here’s the reason—I have a two-year-old son.  He occasionally watches a PBS kid’s show while I’m studying or cleaning up around the house, and one of those is Word World, in which the form virtually every plant, animal, or inanimate object is comprised of the letters that spell out the name of that plant/animal/inanimate object.  For example—the leafy green part of a tree is composed of large green letters that spell “T-R-E-E,” the body of a duck is composed of the letters “D-U-C-K,” etc.  Well, there’s a character in the show named “Shark.”  And guess what?  His body is made of the letters “S-H-A-R-K”—uncannily like the logo of Shark energy drink.  So look at the picture I’ve posted of Shark energy drink, then look at the picture of the Word World DVD cover I’ve posted below—am I supposed to evaluate it independent of the fact that I can’t for the life of me take it seriously or no?

Opening the can, Shark smelled like a Red Bull clone.  Then I tasted it, and it was a Red Bull clone, which I could have been fine with were it not for the addition of some lackluster strawberry syrup-tasting flavoring.  I’m all for different takes on the Red Bull clone phenomenon, but I’m afraid that this is one that just doesn’t work.

The kick was predictable for 80 mg of caffeine—moderately peppy, but not enough to make one feel hyped up to any extent.

Shark’s effects lasted about 2 hours before they wore off without a crash.  Decide for yourself if that’s something you’d go for.

Shark will most likely appeal to people who: 1) like the Red Bull flavor, 2) like really syrupy strawberry flavors, and 3) don’t mind drinking multiple cans to get energized.  I only meet one of those criteria (the first), so it’s only natural that it was not something I was wild about.  But if you meet all three…well, get onto the website and buy a case or two.