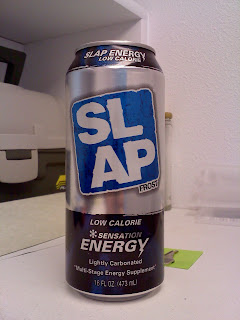 The only place where I’ve seen any Slap product make an appearance is at Wal-Mart, where it is sold for a mere 98 cents per can.  I do not ordinarily award a high score for ease in acquisition to a drink that is only carried at one chain, but given Wal-Mart’s ubiquitous nature, I believe that in this case the high mark is warranted.

The design of the can in which this product is sold is about as simple as they come—quadrate logo in blue and white, with additional information concerning the product found in blue/black bands at the top and bottom of the can.  It’s not so remarkable as to be particularly noteworthy, but neither is it so generic that it warrants any special criticism.  This is a bargain energy drink, after all.

I opened the can for Slap Frost Low Calorie thinking I had a pretty good idea what I was getting into—I envisioned a very sweet Red Bull clone with a significant artificial sweetener aftertaste and the same dirty taste in the mouth as I got after the original, with a hint of a cooling mint sensation in my throat once I was done.  I was right about the first and last parts—this is indeed a Red Bull clone (perhaps just a bit sweet for my liking), I did get that interesting tingling sensation as I was drinking it, but there was no artificial sweetener OR dirty aftertaste to be found.  It isn’t by any means a perfect energy drink, but it really is quite drinkable, and is definitely a better representation of what the company was trying to achieve than the original.

I was quite impressed with the kick provided by the original Slap Frost, and its low-calorie counterpart currently under scrutiny matched it in every whit—the drinker gets a substantial amount of energy with a fair amount of jitters, though I noticed that the serious case of the shakes that I got out of the original was absent from this health-savvy variant, which I consider to be to its credit.

It is only now that I notice that on the cans of both the low calorie and original Slap Frost beverages is the phrase “Multi-Stage Energy Supplement.”  I have no idea how this is managed, but it would explain why this drink is so long lasting.  There were times when I honestly thought it would never quit.  It did eventually, but it was only about six hours later before I honestly felt that the drink had stopped working.

Slap Frost deserved kudos for a fantastic kick, for going out on a limb and trying to create something different for the masses and for delivering it at such a low price, but in truth they really needed to clean up the taste.  In Slap Frost Low Calorie, I feel that they have done just that.  It delivers the same fantastic kick as the original, but without that earthy aftertaste that plagued it.  If you are looking to see what the company is all about, make your drink Slap Frost Low Calorie.