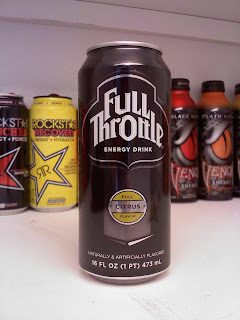 EASE IN ACQUISITION—10
Getting your hands on a can of Full Throttle—Citrus is not hard; it’s sold just about anywhere.  I grabbed mine at Wal-Mart, which carries most of the foremost name-brand energy drinks; finding something there typically means you can find it just about anywhere else.
APPEARANCE/PRESENTATION—8
Full Throttle—Citrus is a pretty intense-looking energy drink.  I arrived on the energy drink scene shortly before they changed their look and kicked the energy blend up a notch, and my can lacks the flames and what not that adorned the previous design.  The change, in my opinion, is from a design that was kind of cartoonish to one that is more hardcore in a speak-for-itself sort of way.
TASTE—6
I’ve noticed that with some energy drinks, the first few sips seem to be different from the taste you get downing the rest of the can; more often than not the taste isn’t great, and then it settles in to something more agreeable, if only marginally.  Full Throttle—Citrus is one of those.  I was really not impressed with those first few mouthfuls—it was a citrus flavor alright, but it was the bitter, watery, unpleasantly sour citrus flavor of a low-end orange.  This initial flavor lasted longer than it does with most energy drinks, and even though the rest of the drink was okay, it really didn’t make up for that first impression I got from it.
KICK (INTENSITY)—10
You want energy, and Full Throttle—Citrus has energy.  This drink had me vibrating—it was really freaking intense.  Walking to and from my chemistry class I had the morning I drank this, I felt ready to lift off and fly to and from my destination, with flames, vapor trail, sonic boom and everything.   Whatever you think about Full Throttle, you can’t deny that the drink is appropriately named.
KICK (DURATION)—10
The kick took a very long time to die down—I was going (pardon) full throttle for a good four or five hours before the effects started to gradually taper off.  After it was all over, I felt—normal.  No crash to speak of, which is a definite bonus in a drink this intense.
THE DRINK OVERALL—8.67
Full Throttle—Citrus definitely has the potential to be a seriously freaking awesome energy drink; one of the best if they could only make it taste good.  I mean, seriously, did anyone try the stuff before they decided to mass-produce and distribute it?  In the end, my verdict is this: when it comes to kick, Full Throttle—Citrus is second to none, and ties with very few others out there on the market.  Question is if you’re willing to drink the whole thing to get that boost.