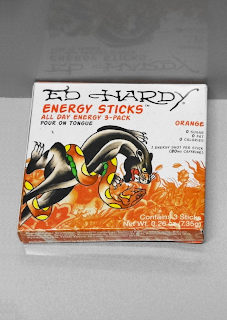 Only place I’ve seen these is 7-Eleven, which is common enough to make getting these relatively easy (provided, once again, that you live outside of Idaho).

The fact that this brand is based off a popular tattoo artist’s work gives it a shot at some decent packaging, even if it’s been slightly cheapened by the mainstream popularity of the brand.  I like the look of the box; the only thing I wish it had were some artwork better suited for the product—I imagine if Mr. Hardy had been involved with this product’s development rather than just the brand bearing his name, we’d get something a little more energy product appropriate than the battling puma and snake featured here.

These taste okay.  I’m not as fond of them as I was the pomegranate flavor; the main problem is that it just tastes all that much more…common.  Not that there aren’t plenty of pomegranate products out there, it’s just that it’s so unusual to find one that’s done right that it’s all the more exciting when you do.  With orange, on the other hand, there are plenty of good-tasting energy products out there, so when you find another, you just tend to think “meh.”

A bit subdued, truth be told.  I suppose they went with the low caffeine content to make sure that they wound up tasting alright, but I don’t think adding a little more caffeine and perhaps increasing the amount of product per stick would have killed them.

Two and a half hours, with no crash to report.

They taste alright and they work alright—but they aren’t really anything to get enthused over.  At least the pomegranate flavor was pretty tasty, so if you’re going to go with this particular brand, go with that flavor.