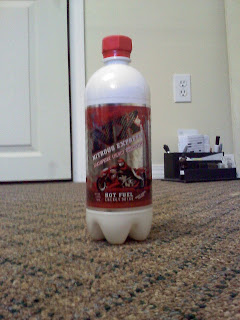 By and large uncommon, though diligent searches should not prove unfruitful.

The frenzied red image with the motorcycle will probably appeal to the racing crowd that this drink is aimed towards, but truth be told, I’m not really diggin’ the red with white of the bottle.  It’s a little Tim Burton/Twilight-ish for my tastes, and neither of these are really things I want to be thinking about as I’m drinking an energy drink.

Wasn’t really sure what to expect when I popped open Hot Fuel—on one hand it was kind of disappointing to get the run-of-the-mill fruit punch scent, but on the other, it was quite a relief to have opened an NX beverage that was not rank with the smell of decay.  Pouring it out into a glass with some ice, I discovered that the beverage was an ungodly shade of pale yellow tinged with red—something that reminded me of a combination of body fluids that I will not mention in this review, and proved to be singularly unappetizing to look upon.  Taking a drink, I was hit with a combination of cheap fruit punch and the original NX flavor—which, without the rot smell, wasn’t all that bad, but still nothing really special.

Wasn’t really drinking this to get wired—it was a last resort to take care of a throbbing headache—but I definitely was wired after drinking it.  I’d describe the effects as intermediate to Speed Freak and Lean & Mean—less smooth than the latter, smoother than the former.  Oh, and the headache did go away.  Just in case you were wondering.

Hot fuel gave me about 4 hours of energy, after which the quercetin did its job and delivered the company’s promise of a crash-free experience.

Kick’s nice, but nothing I couldn’t get elsewhere; and the taste is really nothing I’m all that impressed with.  In the future, I’ll be passing NX—Hot Fuel over, as with the rest of the NX line.