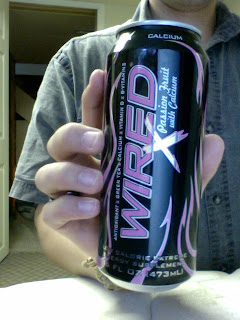 Wired X Passion Fruit falls into the latter category—even though there exist different ingredients in the proprietary blend, most of these have little to do with energy (ex: aloe vera extract and calcium), so in the end, the result is the same—at least as far as I’m concerned.  On the plus side, part of proceeds I put forward to buy this drink were donated towards breast cancer research—so I can at least feel good about that.

This is not one of your more common Wired beverages—one can go for months at a time without a single sighting, then have it pop up at some obscure location.  It can be found…it just requires patience.

This is obviously a female-oriented drink—calcium in the drink, donating portions of proceeds to breast cancer research, and then the packaging…which looks kind of what I imagine hell would look like if the devil were a woman.  Interesting concept, but not one that makes me think “energy.”

Average—enough to wake you up, but not enough to make an impression.

Two and a half hours or so.  No crash.