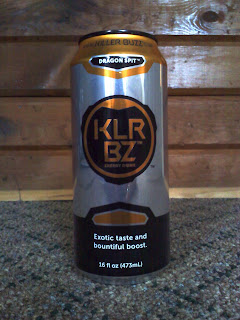 Can’t seem to find it anywhere, online or offline.  The new line is still pretty new on the scene, however, and I’m hoping to see more of it as time goes on.

It is very nearly impossible to go wrong with the combination of black and orange, but Klr Bz deserves recognition for producing a motif that lends itself so effectively to said combination.  Anyone can take a color scheme and use it as a crutch to make an otherwise lackluster can look good, but it’s another thing entirely to do as Klr Bz did and use that combination to highlight the strength of an already effective design.

I have, however, one complaint.  I mentioned it my review of Proto, and plan on mentioning it in my future reviews, because it is a fact that very much deserves attention, and is given very little on the can itself.  Klr Bz gets its name from a blend of ingredients unique to their beverage, known as Giant Hornet Amino Acid (GHAA).  From the website: “GHAA, Giant Hornet Amino Acid, is a synthetic version of the secretion of the larvae of the Giant Asian Hornet. This secretion contains 17 amino acids that metabolize the fat stored in the hornet’s abdomen and turns it into energy, allowing it to fly up to 60 miles in a single day at speeds of up to 25 miles per hour—thus providing SUSTAINED ENERGY.”

Now…if you had so unique a blend of ingredients, something that essentially defines your drink, wouldn’t you expect to see that advertised front and center, giving the casual energy drinker the chance to see it and be intrigued?  Sadly, Klr Bz does no such thing, apart from including it on the left side of the can (not even front and center) in the band circling the top of the can and including a paragraph on it in a positively miniscule font next to the ingredients.  I love that Klr Bz is so distinct with respect to its energy blend, and I would love to see it advertised more prominently.

With a name like “Dragon Spit,” you’d better hope you’ve got something seriously delicious going on, because I actually consider the name to be very unappetizing.  Popping open then can, I got a uniquely tropical scent that got my mouth watering—maybe that’s where they got the idea to name their drink after a mythical creature’s saliva.  Taking a drink…holy cow.  Dragon Spit is indeed some seriously delicious stuff, with dragon fruit carrying most of the weight (which is probably where the “Dragon” part of “Dragon Spit” came from…I’m a quick study), and a few other miscellaneous tropical fruits included to round out the flavor.  I’m not sure when Klr Bz will become more widely available, but I’m hoping for it to be sometime soon—this is something I’d really love to buy by the case.

After dedicating so much time to writing about the GHAA, you are probably wondering—does it do the trick?  My answer is yes—it does.  Mind, this isn’t the sort of beverage that’ll get you super jittery after drinking it—it’s more of a smooth experience, geared more towards getting you awake and functional than really wired, and is in this respect works extremely well.

So far, so good—tastes great, delivers an excellent kick…but for how long?  Best guess is about 5 hours, during which the original intensity of the drink diminished very, very little.   And, once the effects had finally worn off, there was absolutely no crash whatsoever—just felt good and slightly sleepy, and honestly felt better off than I had before I drank it.

Klr Bz has another winner on their hands in the form of Dragon Spit—the taste is excellent, and the kick is one of the better energy experiences I’ve had since I started energy drinking.  I heartily endorse Klr Bz—Dragon Spit, and offer my emphatic recommendation that one make it a part of their energy drinking regime.