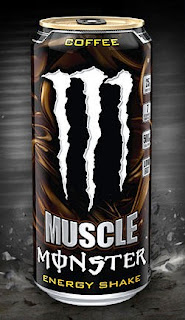 I have been freaking trying to find these freaking things for freaking months!  I can’t for the life of me figure out what strategy Monster had in mind when they released these—they hyped them up for months beforehand, but when that time of release rolled around, I couldn’t find them anywhere (contrast that with the Rehabs, Zero Ultra, etc.).  My fellow reviewers were evaluating them left and right, but it didn’t seem to matter where I went—they were nowhere to be found (across three states, I might add).  Anyway, that’s the way it stayed until the other day, when they showed up at Wal-Mart out of the blue (funnily enough, the presence of an energy drink at Wal-Mart typically connotes ubiquity).  Chances are when I head back to Idaho it’ll suddenly be everywhere short of auto parts stores and Victoria’s Secret (the latter of which does not stock anything containing sugar), but until then I’m playing it safe and calling its availability limited.

One of the things that probably contributes to Monster’s lasting success is the fact that 90% of their gazillion beverages look really freaking nice—Import actually kinda looks imported, Rehab—Orangeade looks genuinely bad*ss, Zero Ultra is as sharp as they come, etc.  This offering is no exception—the dark, swirling background has a way of suggesting smooth shake deliciousness, the Monster M works its usual magic, and the bold, metallic “MUSCLE” seems to communicate utility in a gym setting—in other words, my kind of drink.  An additional point goes towards Monster’s recent inclusion of the drink’s caffeine content on the can—a very nice change from their previous haughty refusal to do so.

I’m not a coffee drinker.  Never have been.  You’ll never see me review a coffee energy beverage on this site—personal reasons aside, I feel that such needs to be left to people who know what they’re talking about; I probably couldn’t tell the difference between a cup of Blue Mountain coffee from a Java Monster.  That being said, I do enjoy things that are coffee flavored—cappuccino Jelly Bellys (spelling intentional) in particular.  Well, think of this thing as a giant, 15-oz, smooth, delicious cappuccino Jelly Belly—plus 25 grams of protein (sans chalkiness) and lots of energy stuff (sans bitterness).  It’s the sort of thing that coffee aficionados might turn their nose up on (Big Red Boots excepted) for the flavor and the general lack of coffee, but for a non-coffee guy like myself, it sure tastes good.

In a word, I’d call this ‘solid’.  Monster is kind of funny when it comes to their energy drinks—about half of them consistently work wonders, the other half don’t do much by way of energy at all; even when I first started reviewing energy drinks I found the original Monster to be grossly overrated in terms of kick.  Not the case here—you need something to drag your sleepy backside out of bed, give you a morning nice dose of protein, get you out the door, and have you hitting the gym like it’s your…subordinate, you can count on a Muscle Monster.

Got somewhere between three and three and a half hours out of this.  Slight crash, but definitely not a deal-breaker.

Good taste, lots of protein, plenty of caffeine…yeah, I could see myself occasionally integrating this into my pre-lifting routine.  Give it a whirl and leave your thoughts.