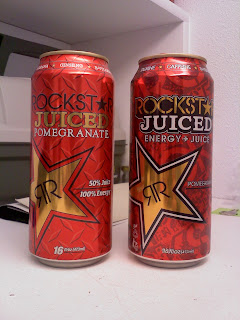 This one isn’t nearly as easy to come by as the others; you might have to look around for a bit to find it.  I find that the more obvious locations (large grocery stores, gas stations) don’t often carry it, and that it’s more common in smaller chains and in more remote locations.

APPEARANCE/PRESENTATION (CAN ON THE LEFT)—7

It may not be the most remarkable-looking thing on earth, but the old-school can still looks nice.  A diamond metal motif was used before Rockstar came out with the diagonal logo-themed background, and even if it looks alright, I definitely prefer the look on the newer can.

It may have the pomegranate flavor down, but it’s missing a lot of elements that contribute to the pomegranate charm—the intensity, the tartness, etc.  This one is a good deal sweeter than one would expect out of a pomegranate drink, and in my opinion, there’s a lot more that could have been done with it.  To be perfectly fair, though, it does taste pretty good; you just have to think of it as an energy drink more than a pomegranate energy drink.

This came as a surprise to me—Rockstar energy drinks usually pack a pretty significant punch, but this one was just okay.  It woke me up and kept me awake, but I was really expecting something a lot more potent.

There seems to be a correlation between intensity and duration; those less intense beverages tend to, with a few exceptions, taper off rather quickly.  This is not one of those exceptions; it wears off sooner than I would have preferred.

So, this wasn’t my best Rockstar experience, being fairly lackluster compared to other products by the company.  Might just be that I got a can that had been around a while—which has been known to happen.  In any case, the 50% juice variant has been replaced by one containing only 10% juice, so chances are I won’t be finding out anytime soon.

APPEARANCE/PRESENTATION (CAN ON THE RIGHT)—10

The “new” Rockstar motif looks pretty freaking awesome in shades of mid and dark red and with the added black accents.  If you have any doubt, just look at it—doesn’t that just catch your eye?

In a word, the drink tastes fake.  It reminds me of those ghetto strawberry sodas I used to drink as a kid but came to eschew as an adult.  The 50% formulation didn’t taste very pomegranate-ish, and the 10% tastes even less so.  Not much of an improvement…I wonder what the Rockstar Juiced Guava and Mango tasted like before their change to 10% juice….

One thing that can’t be said about this drink is that it lacks potency—it wakes you up hard and quick, with enough jitters and alertness to satisfy just about anyone.

Rockstar drinks usually work pretty well for me, but I was still surprised, checking the clock as I started to crash, that it had lasted me about 4½ hours.  I don’t get many drinks that last so long these days, and it was a refreshing thing to experience.

I’m not going to make any claims for the flavor, but the new-ish Rockstar Juiced—Pomegranate packs the punch that I’ve come to love out of Rockstar, and for that is worth any energy drinker’s consideration.