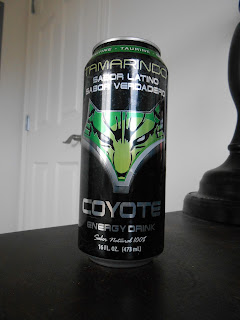 I would guess that since this is a new drink from a smaller company, it would be extremely difficult to find—but I don’t know.  Got mine in the mail.

I noted in my last review of one of Coyote’s products that I very much appreciate the graphic that sits front and center on the can, likening it to “the love child of a wolf and Optimus Prime,” though now I think it would be equally appropriate to say that it looks like the Chihuahua upon which Chuck Norris performed orthopedic surgery.  In any event, it is like the iconic Monster Energy M or the snake eye gracing Venom Energy drinks in that it fits the energy mold perfectly and would make a handsome addition to any gas station’s lineup.

You ever have a tamarind soda?  Then you more or less know what to expect here.  This is essentially a supercharged version of that drink, with a flavor that’s perhaps a bit sweeter than most and not so heavy on the tamarind or the carbonation.  In this I found it to be a hair unbalanced; next to the tamarind sodas I like I found it kind of lacking.  This isn’t to say I didn’t enjoy it; I found the tamarind flavor appropriately Central American in its execution and it’s something I would buy if it became available nearby, but I do have to be honest in saying it isn’t one of the best I’ve had.

You want a rush?  This will give you a rush, one of the most jittery I’ve had in a long time (courtesy of the 200-ish calories worth of cane sugar).  If that’s how you like your drinks, then Coyote certainly won’t let you down.  Personally, I prefer to slug drinks like this down before the gym so I don’t have to feel too guilty.

In taking this down before the gym, you not only burn off the calories (assuming you’re doing intense enough exercise), but you also avoid the crash that awaits you at the end of the three and a half hours.  I’ve had these both immediately before the gym and several hours before, and I can say the former is definitely preferable.

While it’s not anything I’d call life changing, Coyote—Tamarindo is still a pretty solid beverage, and one that I could see myself trying again in the future if it became available nearby.