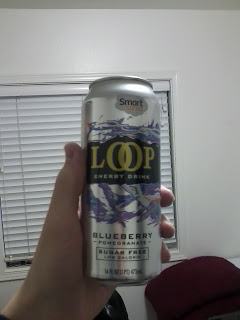 I continue to be confused by my experiences with Loop energy drinks.  Everything about them—K-Mart origins, horrific packaging, derivative flavors, bargain pricing—suggests that they should set a new standard in poor quality.  This especially applies to Loop Blueberry Pomegranate Sugar Free (well, that’s a mouthful, isn’t it?), which boasts one of the most derivative flavors since the Red Bull clone and crap fruit punch flavors, and quite often one of the most poorly executed.

And yet, once again, my expectations have been proven wrong.  Read on.

Very common, due to the wholly unwarranted ubiquity of the K-Mart chain.

Looking the can over, most (i.e. smart people, people who don’t feel the compulsive need to review untried caffeinated products, etc.) people get a “stay away!” sort of vibe and move on.  The thing looks diseased—bare aluminum, abominable print job, name wholly unrelated to the type of product it is, and that weird flame/manic inkblot test background—everything that could possibly be used to the demise of this drink’s hope of appearing appealing comes into play here.  Again, if I did not feel the need to review them, as I have done other energy products, I’d have run as fast as I could until I came to a safe, non-dollar store location—say, Fred Meyer.

Popping open the can and pouring it out into a glass of ice didn’t help the apprehensions escalated by the can itself—the liquid was quite a shocking shade of purple; it’s the deep, almost black shade that you expect to see on the covers of death metal albums.  Taking a deep breath then a swig, I was actually surprised by how not put off I was.  While it’s far from an artfully executed drink, both the pomegranate and blueberry flavors are at least passable, and though the artificial sweetener blend is distracting, it’s the same kind of distracting I got out of Xenergy Cherry Lime Premium, which for all its faults was a pretty decent energy drink.  Loop B.P.S.F. benefits from this association, and I spent the rest of the drink under the impression that I wasn’t drinking a bargain-tasting energy drink.

Definitely more subdued than the jittery kick I experienced from drinking the original Loop, but this was better suited to its purposes of a long day of calculus anyway.  I felt very alert but not terribly jittery, which made it easier to focus on the task at hand.

Not as long lasting as the original, either, but still satisfactory—four hours, sans crash…though I was quite ready for a nap after those four hours had passed.

While far from the best bargain energy drink I’ve ever had (that goes to Spider Energy and Lighter Spider energy), Loop Pomegranate Blueberry Sugar Free is still not a bad drink for a buck.  If anything I’ve stated in this review appeals to you, give it a shot and tell me what you think.