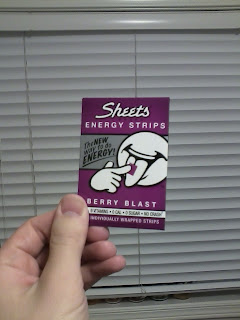 Almost always found in the company of its peers, typically at smaller/local retail stores.

No less effective than its blue counterpart—the whole package (which can slide in your wallet, purse, pocket, brassiere, etc.) has a deliberately tidy appearance to it, with easy-to-read fonts and a simple yet bizarre insignia (eyeless happy face with macroglossia) that comprise the bulk of the envelope’s visual appeal.

I can’t say I liked this one nearly as much as the mint one, simply because berry just isn’t one of those flavors that lends itself to a strip in the same way mint and cinnamon do.  It almost tastes like a berry Listerine mini fruit roll-up, possessing a positively manic intensity of flavor and a bitter aftertaste that’s hard to get around.

From the caffeine content (50 mg per sheet in case you’re not wanting to scroll up), it’s pretty clear that this is not meant to deliver a serious buzz.  It’s more of a day-to-day, masses-friendly energy product, to be taken in the event that a slight, easy-to-access boost is needed, and in this sense, it works just fine.  A single strip will perk you up for a little while (see below), and after that, if you need another, you can.

Now, I know what you’re thinking—why not just down a whole bunch of these if you’re really wanting to get wired?  The answer’s simple—it’s not practical or economical.  These aren’t all that cheap (my envelope of four cost me $2.75), and not all that strong, so if you’re looking to get a cumulative effect, you’re going to want to be buying and carrying these in bulk—and if you’re going to do that, why not just cart around a less expensive energy drink?

Single strip’ll give you two hours of perkiness, without any crash.

I’m not wild about the berry flavor, but if you’re the sort of person I described in my “intensity” section and don’t mind the overbearing berriness, you’ll probably like these strips.