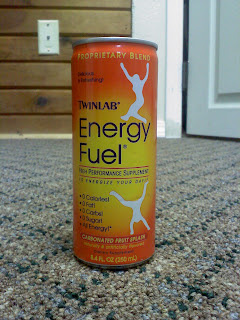 I found TwinLab Energy Fuel at a health food/herb store in Twin Falls—not one of my usual haunts, but upon entering the store to buy some turkey rhubarb as a birthday gift (long story), I decided to peek in the refrigerators on a whim, and Lo!  Therein were a couple of “healthy” takes on energy drinks, including this one.  Not sure what about it earns it a spot in a health food store refrigerator, but keep an eye on such locations if you’re actively trying to find it.

After a bit of a war with myself over my feelings for the can, I’ve decided that I like it.  Even though the leaping white figures aren’t really necessary, and the design is fairly simple, I like that it doesn’t really pitch itself as standard soda-style energy drink fare, but rather as a bona fide health supplement, created with the science in mind more than anything else.  That aside, I like the combination of purple and orange in the background, something you can’t see with the image I’ve provided—you have to roll the can over in your hands to get the full picture.

The can designates the drink’s flavor as “carbonated fruit splash”—so I really had no idea what to expect, except that it would be fruity.  I took a sip, and…it’s a bomb.  It’s got a fruit flavor, but it’s singularly muted and ambiguous—half the time I’m not even sure that I’m tasting it at all, much less able to identify it.  Finished it without any trouble, but it was like drinking water when you’re not really thirsty—really hard to enjoy it, no matter what you do.

At first, I could say that I was impressed with the energy boost I got as a reward for drinking the entire can.  I can’t really say I was wired, but I did get a pretty nice degree of alertness out of it—akin to what I experienced after drinking a 10 oz. bottle of Bawls.

That nice little boost didn’t last long—maybe 30 minutes before I was stuck with a more mediocre energy state.  It held the real fatigue off for maybe another hour after the fact, and then I was through.

I really can’t recommend this drink…health food store grade or not.  It seems to have been made by people who, not really understanding what an experience healthy eating can be (yeah, I know that’s hypocritical coming from an energy drink addict), resigned themselves to eating like guinea pigs, choking whatever it is they eat down no matter how nasty or bland it is on the grounds that it’s good for them.  Sure, the boost was okay while it lasted, but it didn’t last long enough to make up for the mediocrity of the flavor.  You will not miss anything by passing it over, which is the course of action I recommend.