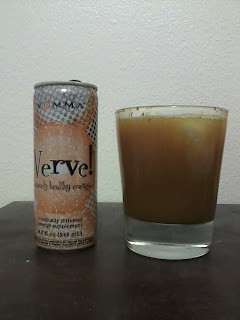 I’ve been sitting on this review for quite a while, mostly because every time I get started on it I wind up on a tirade against get-rich-quick schemes, especially those involving health products.  I don’t think anybody wants to read that, though—if you’re here, you’re here to hear about the product.  So without further ado, here’s my review of the product itself.

You get this through the company by becoming a salesman or through a sales representative—so it’s really not that hard at all to get.  This means of distribution doesn’t help my cynicism, though.

Fairly inoffensive—I don’t love it and I don’t hate it.  Pops well enough, and…that’s all I really have to say, except that it would do well hanging out amongst the likes of Monster and Rockstar in an energy drink fridge.

Ever tried mangosteen?  I hadn’t either before I tried this energy drink, and I was fairly suspicious when I poured the dark, opaque liquid out of the can.  I don’t know how to describe the flavor itself—it’s got a really fruity and satisfying taste and it’s like absolutely nothing I’ve ever tried before.  On this level at least, it succeeds.

After enjoying the flavor so much, I regret that I must say that I’m not impressed at all—I hardly felt anything after drinking the can, except perhaps that I slept a little more restlessly when I went to bed an hour later because I couldn’t finish studying.  And I know that people are going to claim that this is for long-term results and more overall energy and better health and all that jazz, but I just don’t buy it.

I’m exceptionally skeptical when it comes to things like superfruits and antioxidants and vitamin supplementation and all that—the way I figure, if you’re eating the way you’re supposed to, you don’t need to go out of your way to get superfruits or take a daily multivitamin or do of anything of the sort.  Well, embodied in this drink are all those things that annoy me—you’ve got the “superfruit” mangosteen, which is supposed to be loaded with antioxidants and all sorts of other things, and as if that weren’t enough, they’ve filled it with trace (minerals that you need very little of to function properly and get very easily by eating right) and ultratrace (minerals that you need almost none of to function properly, or whose biological role has not been established and yet are being touted by all sorts of people as being extraordinarily important and curative).  All-in-all, I think that the idea behind this product is, for lack of a better way of putting it, baloney.  I could very well be wrong; I’m just a lowly undergrad and have a great deal to learn and would be happy to admit it if it turned out that I was.  But like I said—just be smart with your diet and your lifestyle and you won’t need things like these.

Overall, I’m not impressed.  It tastes good, but doesn’t really work and is based off some science that I find to be pretty sketchy.  I write this knowing that there are probably people who are going to foam at the mouth when I read this, so I will conclude by saying this: I’m happy to read, post, and respond to your comments here, as long as 1) you are civil about it, and 2) you don’t try and make a sales pitch.  If you’re a jerk and/or are trying to get people to buy your product through my review, I will delete your comment and not think twice about it.