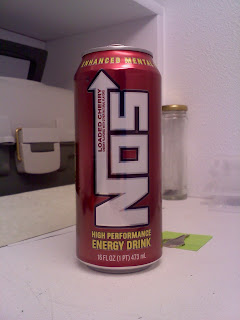 I have no clue as to why, but this one is actually pretty hard to find.  Over the course of my travels since the time that Loaded Cherry came out, I have only seen it a handful of times.  If you happen across it (it seems to be found most frequently at gas stations or grocery stores with a diversely stocked energy drink section), I’d pick it up; otherwise you’ll probably have to wait a while before you find it again.

By my estimation NOS looks good in dark red, even to the point where that noxious urine yellow color that NOS is so fond doesn’t really seem offensive.  Only complaint I have with it is that it may be something that gets lost in the energy drink refrigerator unless you’re familiar with NOS and deliberately looking for Loaded Cherry—it has the tendency to blend in with the other NOS beverages (a side effect of the huge vertical “NOS” logo running up the front of the can, which tends to take the color down to a level of secondary consideration), especially in the presence of Fruit Punch.

I’ve tasted a wide range of cherry beverages with varying results, so my mind was pretty open when I popped open my can of Loaded Cherry.  It’s got that expected cherry soda smell, and once you start drinking the flavor is akin to that of the cherry flavoring in cherry 7-Up, except more concentrated and without the lemon/lime.  It’s a pretty nice experience, especially with the high degree of carbonation the drink possesses.  I almost wish I hadn’t been in such a hurry when I drank it so I could have savored it just a bit more.

Even for a NOS beverage, Loaded Cherry hits you pretty dang hard—seeing as it just occurred to me that this is indicated by the “Loaded” in “Loaded Cherry”, I can say that it the performance of the drink is true to the name—I have not had such a dramatic experience with a NOS drink before.

Only a couple of drinks that I’ve had can compare with NOS—Loaded Cherry’s longevity.  The peak of efficacy lasted at least 2½ hours, and it as about six before I felt like the drink had worn off to the degree that I could sleep if I felt thus inclined.   Thing is, even after that, I didn’t exactly feel thus inclined; I don’t know if I should attribute that to the drink or not.  Either way, short of a Spike energy drink (which deliver a kick I consider way north of necessary or even simply excessive) or Rockstar Zero Carb (read that review next), you can’t ask for a better duration of kick than that provided by NOS—Loaded Cherry.

For the well-rounded energy drink aficionado, NOS—Loaded Cherry is a must.  The cherry flavor is near the top of the list of best cherry-inspired drinks I’ve had (enough to satisfy all but the most selective cherry lover), and the kick was enough that it caught me off guard.  Given the chance, take the shot and drink this beverage.