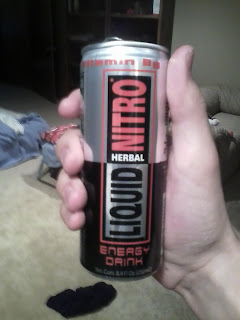 This was one of those finds I made stopping on a whim at an out-of-the-way gas station—you know, the kind that more often than not yields nothing, but occasionally turns up something I’ve never so much as heard of before.  This was the last can of the original flavor; other than that there were two really beat-up 16 oz. cans of the low carb version, plus one that was in good enough shape to add to my can collection.  Picked up both. 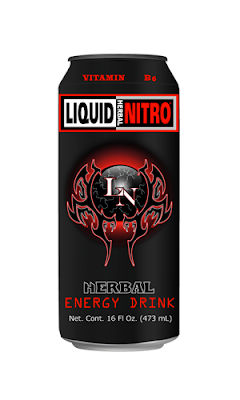 I like the simplicity of the older look; much like Red Bull conveys a silent but certain confidence that makes it very hard to ignore.  The newer one (see the pic of the big can) I like about as much, just in a different way—more in the way I like Monster’s packaging now than Red Bull’s.

This is one of those flavors that I’m going to go on an on about only to say I have mixed feelings on it.  Popping the top, I took a whiff—and another, and another.  I didn’t drink it for about a minute or so because I was so busy smelling it.  It’s very intriguing—like Red Bull, but delicate and complex—things I never thought I’d say about the smell of an energy drink.  Tasting it, it’s more of a fairly standard Red Bull clone—heavier than the original enough that I wanted to dock a point.  There are some nuances of the herbal constituents of the proprietary blend (the fact that it’s made in Jamaica opens doors to all kinds of jokes there, but I will refrain…), which I liked but found to clash with the semi-cheap Red Bull clone flavor.  Some people are going to think it’s wonderful, others aren’t going to care for it at all—it’s just going to be one of those things that depends entirely upon the person.

Kick’s not bad for a shrimpy can.  It’s enough of a boost to be considered useful for less demanding energy situations, which I find I experience at least as often as the more demanding ones.

I got just shy of three hours here—so not shabby.

I would have seen more of a kick, but all things considered I can’t complain about the 8.4 oz. can all that much.  At the very least buying it will provide an interesting flavor experience, and I recommend that you try it for yourself if you can get it.

About the same as you’d get out of most any variety of Monster or other standard energy drink—pretty good, but I would love something that went at least a little beyond the norm.

Three and a half hours, no crash.

Not the best energy drink in the world, but not the worst, either.  Like I said, try it if you can get it, and leave your comments below.