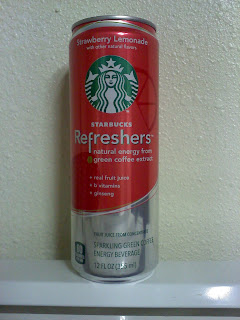 Not uncommon, but still found more at less conspicuous locations than at major chains.  Probably will change soon enough, though….

Starbucks Refreshers—Strawberry Lemonade has the same problem as Raspberry Pomegranate in terms of the exposure of aluminum giving the can an incomplete look, only it lacks the bold, rich coloration of the latter.  On one hand, this means less contrast between the “completed” part of the can and the more-or-less bare part and therefore less of a clash, on the other hand, this lack of clash works as sort of a testament to the packaging’s slight weakness.

I liked Starbucks Refresher’s Strawberry Lemonade's flavor less than I did the Raspberry Pomegranate—even if both had the same overstated sweetness, at least Raspberry Pomegranate tasted somewhat different.  Strawberry lemonade is a pretty standard, run-of-the-mill flavor, and I don’t feel as though I really gained anything out of drinking it.

Quite unremarkable and unsatisfying.  You get a mild boost, and that’s all.  Scarcely enough to be considered a kick.

Starbucks Refreshers—Strawberry Lemonade lasts only about 2 hours before giving out.  Given how weak the initial kick was, I’m surprised I could tell that it lasted even that long.

Well, if you’ve got to try a Starbucks Refreshers beverage, go with Raspberry Pomegranate.  Strawberry Lemonade is really quite unremarkable in every respect, and bound to please only Starbucks diehards.