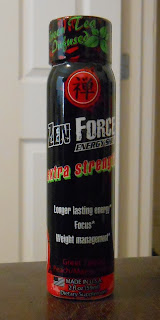 I would say approximately 200 mg if I were to guess, but who knows?

Most common at smaller grocery chains in Idaho and Utah—so for me, getting this is a cinch.  Everyone else (from what I’ve been able to tell) must order it online.

I lauded the packaging of the original strength bottles for the vibrant colors and for its business-like appearance, with no gimmicks or attention whoring elements to be found.  This extra strength bottle takes that latter attribute to the next level, which notwithstanding its less eye-catching black background manages to communicate to the consumer that it’s reasonably serious about what it does, and while it’s not (spoiler alert) a supremely potent shot, it still earns the regard it instills upon inspection.

Looking over the bottle as I was about to pour the contents into a shot glass with ice, I got kind of excited—the corresponding flavor in its original strength was simply called “Peach/Mango” while this one is called “Great Tasting Peach/Mango” (emphasis added), and while I wasn’t sure why they would hold out on the flavor until the extra strength shot, I was excited for it!  Turns out, though, that this wasn’t actually the case—not that this shot tastes particularly bad, but it has acquired some of the bitterness that comes with the extra strength territory…I guess you can only add so many energy-promoting ingredients before that becomes inevitable.  But other than that, it tastes just like the original—just make sure you shake it, so you don’t get a huge swallow of bitterness at the end.  Better to taste a bit throughout.

As per the instructions on the bottle, I drank this a half-hour before I went to the gym.  I remember feeling the energizing effect coming more quickly than the original strength shots, but other than that, I didn’t notice a huge difference in intensity.  Shrugging, I got dressed and headed to the gym.

Then I freaking tore my workout to bits.

This is the sort of thing that’s pretty hard to describe.  I didn’t feel particularly wired, but I broke my personal record on Jacob’s Ladder for distance covered, lifted every weight with greater ease than I had previously, and then after the fact was able to comfortably jog back to the locker room and head home, where I was able to spend the rest of the day in a state of high productivity, cleaning the house and getting the laundry done in a most time-efficient manner.

Like I said, this isn’t a remarkably intense shot, but in terms of sheer functionality, it is very nearly unmatched.

Five very solid hours passed before the effects gently wore off without a crash.

If the original strength shots work for you, go ahead and go with those—the less caffeine it takes to get the job done, the better.  But if you find that they fall a bit short, there’s always Zen Force Extra Strength and it will almost certainly do the job for you.