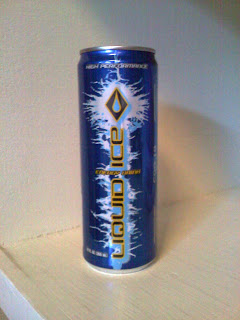 Pretty hard to track down, all things considered.  Picked up my can in a gas station off the interstate in Missoula, Montana.  Haven’t seen it before or since.

Definitely eye-catching, if nothing else can be said about it.  I like the color scheme, I like the broken-ice design surrounding the vertical logo; only complaint I have is that it looks a bit pixilated when you look up close.  But as I said, it appears decidedly out of the ordinary, and stands out impressively in a refrigerator full of the usual, the sight of which is becoming increasingly tiresome.

Pleasant but difficult to describe; it’s definitely sour with an agreeably understated sweetness, but the flavor itself is hard to place a finger on.  My best guess is blue raspberry, perhaps with a hint of blue agave.  The aftertaste is a little heavy, but other than that, it’s plenty agreeable.

The kick is more than adequate for most situations, bringing the drinker to the point of being particularly awake and somewhat jittery.  Impressive that it manages to deliver more than some mainstream drinks that tote a greater amount caffeine than Liquid Ice does.

The duration of effectiveness was similarly impressive—Liquid Ice kept me going for a good few hours, with only a small crash after the fact.

The more I try these less common energy drinks, the more my distaste for the omnipresence of the mainstream comes out—take Liquid Ice as an example; it has a relatively low caffeine content, but delivers an formidable kick nonetheless, and it possesses a unique and thoroughly refreshing flavor, but notwithstanding all this most places I’ve been seem to prefer to carry the products of major companies than take a risk and allow something else to earn a place in the spotlight.  In my mind, Liquid Ice is far more deserving of a consumer’s attention than most conventional energy drinks, and I don’t hesitate to recommend it above the usual (i.e. Red Bull, Amp Energy...you know what I'm talking about).