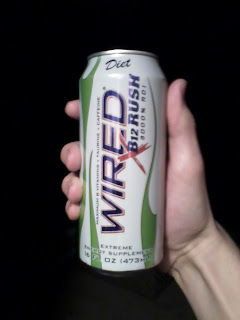 Found more at specialty stores than anywhere else—check your local liquor market.  They seem to like to carry energy drinks.

There is nothing about Diet B12 Rush’s presentation to set it apart from the hordes of nearly identical wires products—just new colors over a bland layout.

As anticipated, Wired X Diet B12 Rush is a Red Bull clone—but, it is an inferior one, even for a Wired beverage.  Like X Diet Burner, the texture is very thick and heavy, almost like drinking Red Bull syrup—not very appetizing.

On the plus side, the gross excess of B12 leads to a more substantial kick than one would otherwise experience—rather than just your run-of-the-mill pick-me-up, you get an above average degree of alertness and some fairly noticeable jitters.  The latter of those two phenomena make it a little hard to sit still, but you can get around that by deliberately drinking it when you’re about to do something that requires a good deal of physical activity.

High end of average—three and a half hours.

Wired X Diet B12 Rush works alright, but the flavor’s a downer.  If you like what this drink’s blend has to offer, however, go with the sugared version—it may have a bit of a medicinal aftertaste, but I’d prefer that to the thick syrupiness of this one.