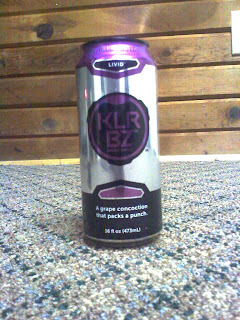 Honestly, I don’t know where to find this stuff yet.  It just barely came out, though, so for now all I can say is give it time….

On that note, I’m going to shift gears, from praises to a rant.  If you’ve read one of my Klr Bz reviews before, you know what’s coming, and I won’t be offended if you skip to my critique of the flavor.  Otherwise, brace yourself for the GHAA rant.

Klr Bz products are unique in the fact that their energy blend includes a combination of amino acids referred to as Giant Hornet Amino Acid, or GHAA.  From the website: “GHAA, Giant Hornet Amino Acid, is a synthetic version of the secretion of the larvae of the Giant Asian Hornet. This secretion contains 17 amino acids that metabolize the fat stored in the hornet’s abdomen and turns it into energy, allowing it to fly up to 60 miles in a single day at speeds of up to 25 miles per hour—thus providing SUSTAINED ENERGY.”

The can itself in all its purple glory gets me plenty excited.  But…knowing what I know about the drink, I know that I could be much more excited, if placed in the position of a curious caffeine seeker.  The fact that this drink proudly contains GHAA is hardly indicated on can, short of including it on the left side of the upper ingredient-listing band and describing it in an out-of-the-way paragraph written in illegibly small font.  The GHAA thing is cool—but people need to know about it, and not just the people who look it up on the website.

Traditionally, I’m not a fan of grape-flavored drinks.  A lot of them tend to taste like cough medicine, and even those that do not tend to receive an average rating from me at best.  Klr Bz—Livid is about as good a grape-flavored energy drink as one could ask for—it’s just such a pleasant blend of tart, fizzy, and grapey that I can’t help but smiling as I think about it.  If you like grape and have been let down in the past by lesser grape energy drinks, I can say with confidence that Klr Bz could very well be the drink you’ve been looking for.

Klr Bz—Livid is not the sort of drink that will enable you to shoot blasts of energy from your loins, allowing you to obliterate mountains with a single pelvic thrust.  It’s not the sort of drink that’ll get you so wired, that everyone else in the room will be feeling the buzz.  Mind you, I do like drinks that do that sort of thing, but in a way, Klr Bz is above all that.  They’re not into delivering gross excesses of energy—they’re out to help you blow past the fatigue and the cobwebs and set you on a path of alertness and functionality.  If this is what you’re after, get yourself a Klr Bz—Livid.  Heck, get any of the five flavors.  They’ll all do the trick; it’s just a matter of which flavor you prefer.

Remember that path of alertness and functionality that I just mentioned?  Well, Klr Bz—Livid isn’t the sort to set you on that path, only to knock you right back off it when the crash comes.  The GHAA really shines in this respect—you walk the lucid path for the better part of five hours, after which you will feel tired again, but distinctly less so than before you imbibed.  It’s a rare thing indeed to find a beverage that makes you feel better for having drunk it.

After everything I’ve said—do you really need me to clarify how I feel?  Do I need to reiterate everything I’ve said in two or three sentences?  I hope not, because if so, I haven’t done my job.  Find yourself a Klr Bz—Livid and let me know what you think.