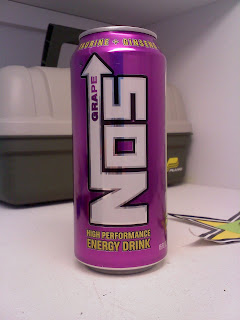 Less common than the original, more so than the Fruit Punch, Charged Citrus, or Loaded Cherry flavors.  Balances out to being fairly customary in terms of commonality. 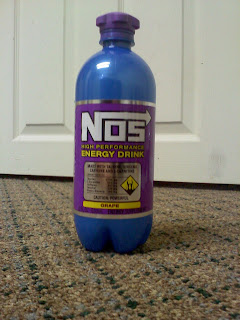 The NOS—Grape can follows the same basic layout as all drinks in the NOS line, just with a different color scheme.  Given the fact that I typically favor drinks clad in purple, it shouldn't come as a surprise that I like the can that NOS—Grape comes in.  It’s a kind of purple different from most that I’ve seen (electric purple), and it manages to make even that obnoxious yellow look good.  And let me tell you, it looks especially good when it’s fresh out of the refrigerator, with a fine coat of condensation covering the entirety of it…gives me the chills just thinking about it.  The bottle features a different, more standard shade of purple, which is actually not quite as aesthetically pleasing, and is not complemented by the shade of blue the bottle employs.  So…kudos to the can, the bottle…not so much.

Not quite enough to win me over as a convert, but it still tastes alright.  It’s got pleasant texture to it (moderately thick, reasonably smooth, with just the right degree of tartness to it) with just a hint of something that reminds me of the traditional energy drink flavor, but not quite.  Not quite sure how to describe it, but whatever it is, it works.

I don’t think NOS actually knows how to make a weak energy drink—doubt they’ve even tried; what do you think was going through their heads when they decided to stick 260 mg of caffeine into a 16 oz. beverage?  Anyway, point is, the stuff works exceptionally well, delivering as much as could realistically be asked of an energy drink.

Once NOS—Grape (or any NOS beverage, really) gets you going, you can expect to stay that way for a while.  It takes about five or six hours after drinking it for it to wear off to any appreciable extent, and I honestly didn’t notice too much of a crash at all after the fact.

There’s no denying that the energy boost NOS—Grape delivers is fantastic, and for that reason I feel comfortable recommending it.  The flavor’s not going to please every palate (although it is better than most grape drinks), but given the kick it delivers, this one fault appears minor indeed.

Kick you get out of the bottle is marginally stronger than the can, but not so different for me to get particularly excited.  But once again, NOS delivers in terms of longevity….

Again, you can expect more as long as you haven’t had two bottles of NOS in the previous 72 hours, but even if you got only 8 hours of energy out of this (as I did), wouldn’t it be worth it all the same?

I like energy more than I do grape soda-esque beverages, and NOS—Grape in a bottle has energy to spare.  And if you do like these grape-inspired beverages…well, NOS—Grape’s 22 oz. bottle should be a no-brainer.