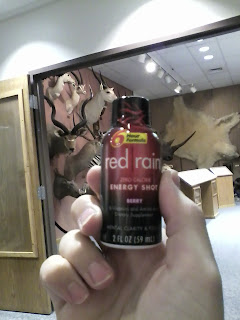 The only information you get from the label is the typical “comparable to a cup of the leading premium coffee” bull.  I’d LOVE for companies to get out of the habit of not disclosing their caffeine amounts—it’s not cool, it’s not mysterious, it’s not whatever you happen to think it is…unless you also happen to think it’s very annoying but do it anyway, in which case you need a life.

This one recently showed up at Wal-Mart, but is not (!) sold with the other 88 cent shots.  It’s available in a double pack for $1.98 plus tax, which is still not bad at all for an energy shot.

Pretty standard for a shot.  I like the red glow in an otherwise black background (makes for a sleek shot), but it does seem to have borrowed the idea from 5 Hour Energy Extra Strength’s bottle.

This is an obvious 5 Hour Energy knockoff (makes sense, given that the drink was a Red Bull clone), but to be perfectly fair, it does taste better—less harsh, less fake, and with a distinct taste of strawberries.  If only for that…and the price, I guess…it’s worth making the switch.

In terms of intensity, this is actually quite superior to 5 Hour Energy—and almost up there with the Extra Strength formula.  The kick lies on the jittery end of the spectrum, but I don’t have a real problem with that, so it wasn’t a deal-breaker for me at all.

I’ll be honest—I didn’t pay all that much attention.  It lasted somewhere between five and a half to six and a half hours.  No crash whatsoever.

To me this still represents a ho-hum energy product, but it’s still better than the shot it copied.  Chock this down to one less reason for 5 Hour Energy to exist.