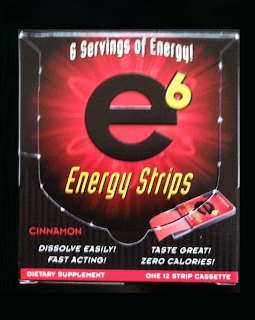 Pretty scarce—only was able to get them at one gas station locally, and for a while I just passed them over—I wasn’t about to pay $4.99 for a single pack, and from what I saw, neither was anybody else.  Shortly after, however, they brought the price down to $1.99 just so they could get rid of them—so needless to say, I jumped at the opportunity.

Mixed feelings on this one.  First thing that bothers me is the texture—when I stuck this one in my mouth, I felt like I had just put a thin strip of flavored leather in my mouth, and it needed to be chewed before it would dissolve to any appreciable degree (not pleasant).  Second thing is the initial flavor—when the strip/strip-derived muck is in your mouth, it tastes harsh and not very good.  However, once you swallow that, you’re left with a very pleasant residual cinnamon flavor that lasts a decent while after the fact.  If only for that, I approved.

Seeing as the box identifies a serving as two strips, I figured I would base my review on that.  The energy boost from the 80 mg provided wasn’t all that spectacular—just enough to make exercise a bit easier.  Wouldn’t depend on these for anything where staying awake is imperative (driving, etc.).

Duration was about two and a half hours, with no crash to report.

Not the best energy product in the world, but not the worst either.  Worth trying at least once if you’re into this sort of thing.