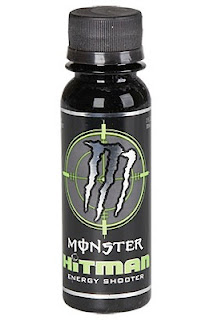 Recently, I did something that for me was wholly unprecedented.  It was something that I never thought in a million years that I would see myself do, something so out of character that I still question as to whether I actually did it.

I bought and tried out this energy shot.

Now, for most people, picking up an energy shot are nothing out of the ordinary.  But for the longest time I was vehemently opposed to drinking/reviewing energy shots in any form, just because I found the very idea of them to be so terminally boring.  That all came to an end after my recent Big Lots excursion, in which the look of Monster Hitman so intrigued me that I caved.  As a result, from this time henceforth I am expanding my reviews to include energy shots, as well as other nifty energy products (you can thank Perky Jerky for that).  For the sake of those looking for one thing or the other, I’m keeping the lists of shots, drinks, etc. separate.

Anyway, enough fluff.  Let’s see if Monster Hitman lives up to its appearance….

Easy if you live near Big Lots, at least for the time being.  Plan on never seeing them again once they’re out.

Nifty enough that it broke down my resistance and got me to buy it.  The bottle itself is black, three ounces (vs. the usual two), and has a label that is actually covalently adhered to the bottle itself—vs. shrink-wrapped around.

The taste is about what you would expect if you were to drink three ounces of blue raspberry Otter Pop juice at room temperature—whether or not that appeals to you is strictly subjective.  Even if I found it to be palpable, it still was rather anticlimactic after getting all psyched up over the packaging.

Very, very, very average—kind of like what you would get if you drank a normal 16 oz. Monster.  Woke me up alright, but I wasn’t by any means jittery or even especially productive.

I got about three hours without a crash.

At the end of my first energy shot experience, I feel singularly underwhelmed.  Everything about the experience is so ordinary—nothing worthy of note at all.  But if what I described appeals to you, now’s the time to buy these up—afterwards, they’ll be gone for good.

Under normal circumstances, I would just dismiss energy shots as a waste of time and move on.  But, strangely enough, I only feel more resolute in my decision to review them—I will find a great shot if it takes years!