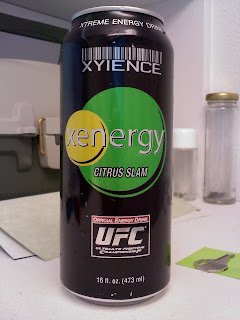 The lemon yellow and lime green over black didn’t do much for me; it looked to me kind of what Sprite tried to toughen up its image.  Even if the getup isn’t terrible, it is pretty generic-looking.

If you’ve been reading my Xenergy drink reviews up to this point, you probably expect to hear at least one of the following: 1) that Xenergy Xtreme Citrus Slam does have an authentic taste, as do the rest of the line, and for that is worthy of commendation, and 2) that the artificial sweeteners didn’t do it for me.  In this case, I found the sweetener blend particularly hard to deal with; there were moments where the aftertaste reminded me of the smell of the cadaver lab where I do a lot of studying.  Not pleasant, even if I doubt any of the ingredients here doubles as a tissue fixative.

All Xenergy drinks tend to rate pretty well in terms of potency, though it should be noted that this one stands out as the strongest of the line I’ve had so far, and should deliver a pretty significant wallop to anyone outside the influence of opiates and/or barbiturates.

As I experienced the blessedly potent effects of Xenergy Xtreme Citrus Slam, I began to worry…was it to last?  But a week or so before, the effects of Xenergy Xtreme Orange Fuel had forsaken me in the hour of my greatest need, and I was quite concerned that history was doomed to repeat itself.  Yet…no such thing occurred.  It was a solid four hours before the effects had worn off, and left me without a crash to deal with.

While contemplating how to word my final verdict, I concluded that while I wasn’t wild about the taste, the kick rocked­—this is definitely a beverage that means business.  For this kind of effect, I’m quite willing to overlook the flavor and give it the thumbs-up.