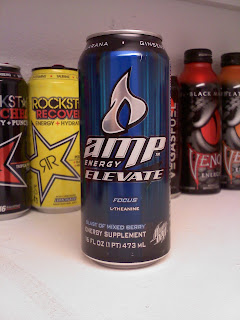 Amp Energy—Elevate is about as available as the original Amp Energy, which you can get just about anywhere.  You shouldn’t have any more trouble finding it than you would the original.

The Amp Energy design doesn’t really doesn’t differ at all between flavors—same general motif is on every can, just a different color for every flavor.  Sometimes this works, sometimes it doesn’t.  The blue version corresponding to Amp Energy—Elevate doesn’t work quite as well…it isn’t unattractive, but the change of color with the change of flavor while keeping the Amp motif just seems to be more of a cop-out than usual in this particular case.

The can describes the taste as being “A Blast of Mixed Berry.”  Truth be told, this wouldn’t have been my first guess.  I would have said…heck, I don’t know what I would have said.  I guess it’s got a sort of berry tartness to it, and it’s sour as some berries are, but other than those flavor features it doesn’t have anything I would recognize as being berry-inspired.  Mix the tart and sour with however much sugar it’s got in it (something I don’t usually pay attention to) and that’s about all there is to it.  The end result is not especially unpleasant, but not something I’d be anxious recommend.

I would consider the kick a little understated for something that’s supposed to be an energy drink.  I guess I can say it kept me awake, but it wasn’t appreciably more than what I would have expected from a sizable dose of the Mountain Dew that Amp Energy is affiliated with.

I was not impressed with how hard the kick hit me, and was even less impressed with how long it stayed with me—definitely not long enough to make up for its lack of force, not by a long shot.  It was there for a little while, and then, just like that, it was gone.

Overall, Amp Energy—Elevate is really quite a halfhearted effort on part of the Amp Energy company, just another flavor they've cranked out to rope in another demographic (the berry people, I’m guessing, but they’d probably be disappointed as well).  With the lackluster flavor and anemic kick, it’s not really something I’d recommend for any realistic energy application.  There are better tasting, far more effective energy drinks for just about any situation.  Go with one of them before you grab an Amp Energy—Elevate.