Review for Wired X B12 Rush 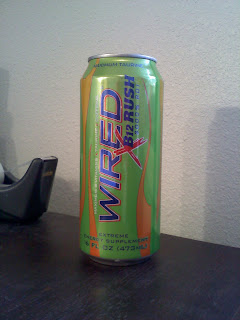 Wired X B12 Rush distribution is scattered, just like all products of the Wired beverage line.  Be patient and you’ll come across it eventually.

I’m conflicted on how I feel about the packaging on X B12 Rush.  On one hand, I really like the color scheme—which, if you’re familiar with my reviews, wins quite a few points in my book.  On the other hand, it possesses a quality that bugs me that is common to the presentation of almost all the Wired beverages, and that’s the fact that the whole thing looks cluttered and unfocused, as though the drink isn’t sure that it knows what it’s all about.  You can get away with the ghetto flames and the logo if you’ve got the right color combination, and as nice as that combination is on X B12 Rush, it doesn’t work with the motif.  Anyway, I think I’m spending way too much time on this.  On to the important stuff!

Wired X B12 Rush exists in between the Red Bull execution and Monster Energy execution of the traditional energy drink flavor.  On one hand, it’s sweeter than most drinks that lie on the Red Bull side of things, and on the other, it’s not sweet enough to be on the Monster Energy side of things…wow, that was a little bit verbose for someone who’s just trying to say “the taste is halfway between a Red Bull and a Monster”…but that’s the way it is.  There is bit of a medicinal aftertaste there, enough that I had trouble deciding whether X B12 Rush deserved 7.5 or 8 points out of 10.  In the end, the 8 won over, if only by a bit.

Lots of vitamin B12 (3,000% daily value) means jitters, and that’s what you can expect when you pop open a can of Wired X B12.  For having only 94 mg of caffeine, I was surprised that it kicked as much as it did—I was plenty awake and jittery, and didn’t have any more issues with falling asleep over homework.

It was about 3, 3½ hours before I really noticed Wired X B12 Rush wearing off, and even after the whole experience was over, there was a complete absence of any sort of crash.

Flavorwise, Wired X B12 Rush is the same ol’ same ol’, which isn’t bad if you’re into the traditional energy drink flavor (I personally like it).  Assuming that you are, Wired X B12 Rush provides a solid kick with only 94 mg of caffeine.  If any of this appeals to you, go for it.  If not…read some of my other reviews until you find something that does.