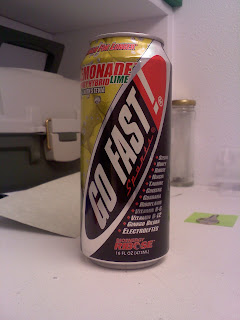 As with just about all of the products Go Fast distributes (with the possible exception of the original, which I can actually find at a place or three within a 20-mile radius of here), I had a hard time finding this one.  Few locations seem to carry it, and those that do are typically a bit out of the way.

The look is pretty unremarkable and about what you would expect given the flavor, just the logo and a stock image of lemons and limes.  There isn’t much more to it than that.

Given my experience with Go Fast Berry Energy Hybrid, I really wasn’t looking forward to drinking another beverage in which stevia was prominently advertised as an ingredient.  Beginning the drive home from Twin Falls, I opened the can, braced myself, took a sip, and…whoa.  I took another sip, then another, followed by a healthy swig.  Was it great?  No, I wouldn’t say so.  But it was decent, and coming from a stevia-hater like myself, that’s a big deal.  The taste is very lemon-oriented, with the lime manifesting itself mostly as an aftertaste (albeit a pleasing one).  And what’s more, it was convincing—blindfold me, give me a glass of this and a glass of lemon/limeade, and I probably wouldn’t be able to tell the difference between the two.  Now, to elaborate on the impact of the stevia, I actually didn’t taste it at all—my guess is that a strong sweetener needs a strong flavor (like one provided by a homogeny of lemons and limes) to cover up the less desirable attributes of its taste, and it seems that Go Fast Lemonade Lime Energy Hybrid has done just that.  As I said, it’s not stellar, but it at least represents a step in the right direction when it comes to using stevia as a sweetener.

Kick was intermediate in strength to the original and the berry formulation—less potent than the former, moreso than the latter.  It did the job just fine, and that’s all I really cared about.

I am pleased to report that as far as duration is concerned, Go Fast! Lemonade Lime Energy Hybrid is above average.  I was quite concerned that it would wear off, given the fact that we had to make an extra 45-minute trip back to Twin Falls after we’d left, but I was covered for that and the rest of the trip.  Nice job, Go Fast Company.

Even though it’s hasn’t exactly found a place as one of my favorites, Go Fast Lemonade Lime Energy Hybrid has certainly earned my respect by virtue of its overcoming its stevia content and delivering a palpable flavor in addition to a respectable kick.  My mind is now open to the idea that stevia-containing beverages just might not have to suck (my guess is still that most will), and that it’s just one of those things that you have to get just right in order to make it work.