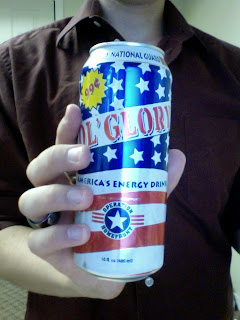 Seeing as yesterday was the 4th of July, I thought it appropriate to review a recent acquisition called ‘Ol’ Glory’—a patriot-themed beverage that considers itself “America’s Energy Drink” and backs up the claim by including the National Guard’s information line and donating a portion of all proceeds to Operation Homefront.  So, we know what the makers think of the stuff, but how does it perform?

As a general rule, Ol’ Glory is fairly uncommon.  Found it at a gas station on the Oregon/Idaho border that actually turned out to have quite the supply of caffeinated beverages—but I digress.  That’s the only place I’ve seen it before or since.  But, I’ll keep my eyes open and update this section as time goes on—though I doubt it’s going to get any easier to come by.

No disrespect towards the flag of the Country I love, but the execution here isn’t stellar, and actually in my mind takes on a bit of a condescending air by reducing the Star-Spangled Banner to a mere cheesy gimmick.  The whole thing has a faded, washed-out look, and the generic fonts that everything’s printed in don’t help at all.  If you’re going to make a drink you consider to be the best thing since the Constitution, you’d better package it to fit the mold.

Given the fact that no flavor was indicated on the can, I was anticipating a Red Bull clone.  Turns out I was wrong—which, in this case, is refreshing.  The flavor was a little hard to place initially, as I got the combined nuances of guarana and lemon lime and even what I thought might have been ginger ale.  Eventually, it became clear that the drink was essentially Sprite, with the exception of some energy drinks that kind of trick your tongue in the beginning.  It’s really not all that bad, but the thick syrupy texture brought on by the use of high-fructose corn syrup is really obvious here, and is a bit of a turn-off.

The kick Ol’ Glory delivers is not ostentatious—in fact, unless you’re initially very tired, you might not even notice it for what it is.  I do not mean to say that it is not effective—I consider it to be so.  What I am trying to say is that it’s subtle—you don’t at any point feel wired, you just feel awake—like how I used to feel after a good night’s sleep before I got myself all addicted.  It was a refreshing feeling, and something I could go for again—or, maybe I’ll just wean myself off energy drinks and feel that way naturally.  But until then….

Ol’ Glory works for about two and a half hours before terminating, at which point only a marginal crash is noticeable.

Checking out some of the other review sites on the web, it seems I’m about to post (or, if you’re reading this, have posted) the only positive review on this drink—which is honestly okay, because to be truthful, I didn’t mind it so much.  No, it’s not good enough to land itself a place on my top 10, or even enough to get me earnestly recommending it.  But, for 99 cents, I don’t consider it to be a loss.