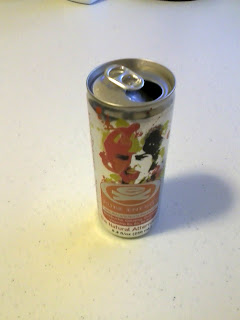 Found this at the local grocery outlet for 30 cents, and like others of the kind, I haven’t seen it before or since.

…I don’t get it.  This thing is a mess—I’m guessing it’s supposed to be EXTREME or something like that, but it just doesn’t work—looks more like someone swallowed a couple of different colors of paint, then yaked on the guy on the can—who looks, incidentally, disgusted at the fact.  Making matters worse is the fact that this has nothing to do with the whole “natural energy” EX boasts about on the can.  Bottom line—design’s a flop.

You know, it took me forever to decide what I thought of this, and in the end, I think I really hate it.  It’s really sour and earthy—which normally I like, but the problem is it’s these things in all the wrong ways, so it tastes more or less like I’m drinking tonic water (that might be the kombucha extract, whatever that happens to be).  A bit more tweaking and this could have been a very well-executed drink, but in the end, it’s just an unpleasant experience.

All natural or not, EX Pure Energy is a dud.  Unless you want to buy three or so (which you could do, and still not spend an entire dollar), you’re unlikely to get a substantial boost, but downing a whole 25 ounces of this stuff would be a serious chore, and not worth the energy.  This is just another one you should pass over.