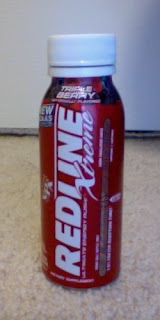 It’s been a couple of months since my last review of a Redline drink, and I’ve started to feel a little uncomfortable about it.  I wasn’t very wise about how I went about consuming it, and I went on a real tirade about it after the fact.  Yesterday, though, I had a thought: “Hey, Brandon…why don’t you actually use one in accordance with the instructions on the label, then report on that, and revise your previous review to reflect how it works when you’re not being stupid?”  I’ve done it, I approve of the product, and I’m ready to really review a Redline energy supplement.

This one’s actually found at Wal-Mart (Or at least the version with the blue wrapper is…hey, what’s the difference between the RTD and the Xtreme lines anyway, except for the former contains toothed clubmoss?), though you have to hunt a bit for the other flavors.  Maybe it’s because this one tastes good (kinda).

I’m not big on Redline in red—clad in blue it means business, in red it just seems to be shouting.  And really, it doesn’t need to shout.

Saying “I liked this” might be putting it a bit strong, but it is quite a bit more palpable than other Redline products.  The mix of berries (raspberry, blueberry, strawberry) is pleasant enough; the only thing that brings it down is the harshness of the aftertaste—which is still not so bad as others of the line.

Amazing what happens when you do what the bottle says (and exercise common sense), rather than just doing whatever the freak you happen to feel like.  This is definitely something to be taken before intense exercise or physical exertion; do not for a moment suppose that this is something suitable for your run of the mill, day-to-day droopy eyes.  Half a bottle will give most everyone a serious rush of energy; just remember that it takes about a half hour to get going (I waited 15 minutes and downed the rest of the bottle…which didn’t get me uncomfortably wired like it did the first time I attempted it; perhaps the 15 minutes were all I needed.  All the same, be careful).

A half-bottle lasts five hours, after which there is no crash to speak of (The whole bottle, incidentally, will last you ten.  Like I said, that is not something I recommend.).

Well, if you’re going to go Redline, go with the berry flavor.  And obey the instructions on the label for optimum satisfaction/safety.