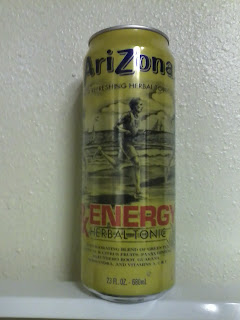 Never really paid attention to Arizona drinks until this one caught my eye.  Most are found almost everywhere, but this one seems to be a hair less common than the rest.  Still, it’s not by any means impossible to find; you just might have to make a few more stops than usual before you do.

I have mixed feelings about this can.  I like the semi-old school look, with the black and white image of the runners and the red “RX ENERGY”, but I hate the shade of yellow used as the background—the drink would look so much better with a vastly less ugly color.  The overall effect is somewhat lackluster, especially next to the flashier Arizona cans.

Wasn’t sure what to expect here—I know people who love Arizona drinks so much that they practically orgasm every time they pass by a can at the store, and I’ve known others who, trying one for the first time, open the passenger-side door and spray their first mouthful out, not even sparing a second to make sure they didn’t aerosolize the stuff all over the car parked next to us (which is what my wife did, if you were wondering).  I found it was about average in terms of pleasantness—I liked the mango, lemon, and orange flavors mixed in here (I found myself thinking it was somewhat like a superior version of Amp), though I didn’t like the high-fructose corn syrup taste that kind of marred the last little bit of the flavor experience, or the somewhat unpleasant aftertaste of the herbs used to provide the boost.  Still, it wasn’t bad enough to be a deal-breaker for me.

This is where Arizona RX Energy shone in my eyes—not because it was exceptionally intense, but because of how nice it felt to be in the throes of its boost.  This is a drink for which the term “kick” is almost misleading—it’s more of an energizing refreshing.  I honestly felt fantastic, like I’d had a good night’s sleep and a good breakfast and was properly hydrated and everything.  If only for this, I’d be happy to go back to Arizona RX Energy.

Three hours, without even so much as a hint of a crash.

You’ve got to try this one.  I wasn’t super wild about the flavor, but I loved how I felt after I drank it.  This has a kick that’s in a class of it’s own, and would love to see in other energy drinks.  But…since I haven’t experienced anything quite like it with any other beverage, I guess I’ll have to keep going back to Arizona RX Energy.

Did I mention it only costs 99 cents?