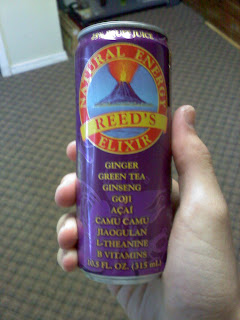 Not certain, though I’m fairly confident it’s rather low—all you really get is the caffeine from the green tea extract.

This, like TwinLab Energy Fuel, is the consequence of my checking out the refrigerator section at a local health food store.  If you have one of those nearby, you might be able to find this there; otherwise you’re probably out of luck.

Even if it doesn’t grab and hold your attention the way some energy drinks do, I consider the packaging appropriate, given the fact that this is more of a health supplement than a traditional energy drink.  Overlaying the purple Hawaiian floral motif you have the name of the drink surrounding/cutting through the image of a volcano (a source, I suppose, of “natural energy”), then a list of ingredients incorporated into the drink’s formula.

This one tastes…interesting.  That is probably as appropriate an adjective as I’ll ever be able to attribute to this drink.  Initially, the combination of flavors is a bit…unusual for comfort, but as I slowly took down all 10.5 ounces, it began to grow on me.  For the most part, it’s the earthy flavor of the tea extract and the goji berries, followed up by the warmth of the ginger and the heat of the ginseng.  Not going to please everyone—I imagine there will be many who hate it—but in the end, I thought it tasted alright.

I wouldn’t have you believe that this drink does nothing—I’ll get into the perceptible effects in a moment—but know that this is not a load-you-with-caffeine-and-wake-you-right-the-freak-up sort of “energy drink.”  The blurb on the side of the can makes this clear, stating something to the effect that this is more of a long-term deal, meant to stimulate the metabolism and give you greater energy in the long run.  As such, the effects were extremely subtle.  When I drank this, I was pretty tired after my morning run, and honestly feeling a bit wrung-out from the rushed pace of the previous week.  I took it down, the drink did absolutely nothing to alleviate my fatigue, but it did eliminate from it the wrung-out quality, at least for a time.  Anyway, pretty bad if we’re rating it as an energy drink, but as a health beverage, I could appreciate the effects.

Very short-lived—probably a half hour, 45 minutes passed before I was back to where I was.

So, if we’re rating this as an energy drink, Reed’s Natural Energy Elixir tanks, and is definitely not something I’d count on for a serious (or really perceptible) boost.  But then again, it’s not really meant to be an energy drink in the same way Monster, Rockstar, etc. are energy drinks, so take my final score for what it’s worth.