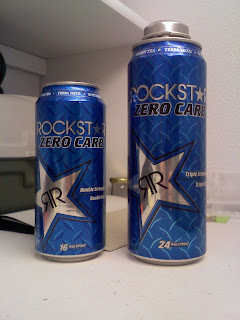 Rockstar Zero Carb is just about as omnipresent as the original, with perhaps a few exceptions to that rule.  If you aren’t able to track it down, I’d guess you’re at one of those middle-of-nowhere gas stations attended by a middle-aged man in faded overalls named Buford that sells only the original Rockstar and the entire Knockout Energy line.  Maybe Monster also.

Rockstar Zero Carb’s presentation has intrigued me for a very long time—in the past, I haven’t been wowed with the diamond metal motif present on Rockstar Punched—Citrus and the old-school Rockstar Juiced—Pomegranate, but on the blue it’s just freaking awesome.  That plus the silver of the Rockstar logo and the black/silver lettering makes for a dang nice-looking energy drink.

Rockstar Zero Carb is, in my opinion, one of the best-tasting energy drinks on the market.  I’m relatively new to the low/zero-carb energy drink scene, so I imagined that I was going to be dealing with something similar to the original.  It was a surprise, then, when I got a very clean berry smell when I popped open the can.  Intrigued, I took a sip, and got a surprisingly simple blend of raspberry, a hint of sucralose, and seltzer water.  It reminded me of a high-end raspberry ginger ale I used to drink when I lived out in Connecticut, and got me enthused about the taste in a way that I have not been in a very long time.  If only for the taste I would come back for more, but wait until you hear how it worked….

Rockstar did some tweaking with the energy blend when they came up with Zero Carb, and the result is one of the best kicks I’ve gotten out of an energy drink—kind of a textbook definition of the phenomenon, if you will.  It wakes you up to the same degree a 55 gallon drum of water over your head wakes you up, but with a much more agreeable effect—you are awake, you are jittery, and you are ready to blow up mountains with a pelvic thrust.  And this is only the 16 oz. can I’m talking about….

I imagine that there was some influence from Zero Carb when Rockstar designed Xdurance, because they are similar in the way they keep you going, and going, and going…I kept going for about 5½ hours before I was finally able to sleep.  Also, there was no crash.  That’s awesome.

I’m getting jittery just thinking about the 16 oz. Rockstar Zero Carb.  Or maybe that’s just me getting excited that I was able to review an energy drink that embodies the term so well.  The taste is next to impossible to beat, and the kick is one of the best out there.  In all honesty, there is no reason for you not to get up from your computer and buy this drink.

And now, we go on to the 24 oz. Rockstar Zero Carb with it’s whopping 360 mg of caffeine.  How intense is the 24 oz. Zero Carb?  Enough that I had to rethink my ratings system and come up with an additional rating to accommodate it.  See, a number of drinks I’ve had are exceptionally intense—the original Rockstar, Rockstar Xdurance, NOS—Loaded Cherry, etc.  But I’ve only had a few drinks that really take things into overdrive the way the 24 oz. Zero Carb does.  It’s right on that point where if it were to go much further, you’d wind up with a drink like Spike, which is just painful to go through with it’s raw, unrestrained intensity.  Thankfully, the 24 oz. Zero Carb doesn’t hurt, but it’s about as balls-to-the-wall as you can get without hurting yourself.  Imbibe, but imbibe with respect.  Maybe stick with 16 ounces if that works well enough for you.

This is where I would call Rockstar Zero Carb “ridiculous” if I didn’t enjoy it so dang much.  I drank the 24 oz. can at about 10:00 A.M., and by 3:00 P.M. I was still fully wired.  It took about three more hours after that for me to settle down back to normal.  Again—this is not over-the-top, but it has a staying power that no drink I’ve had before has aside from Spike, which, as I indicated in its review, was just overkill.

Did I love the 24 oz. Rockstar Zero Carb?  Heck, yeah.  Do I recommend it be treated with respect?  Of course.  This is a very powerful drink, and should be treated as such.  It might be best if you stick with the 16 oz. can if you are particularly sensitive to caffeine.  I almost can’t get enough of this stuff, though, so I finish this review by saying that Rockstar Zero Carb is one of those rare, second-to-none kind of experiences.  Anyway, if you’re reading this, you’ve either 1) kept my advice and left the computer to buy a Rockstar Zero Carb, in which case I commend you and wish you happy buzzing, or 2) kept reading, in which case…that’s okay. But now you can go get a Rockstar Zero Carb.