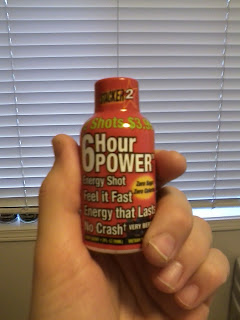 Probably in the ballpark of 100 mg, but not listed.

Generally unpredictable as to where you’ll find it, but chances are there is somewhere nearby—whether it be convenience store or gas station or grocery store.

I’m pretty unimpressed with this one—all words and declarations of value and what not.  It’s very unimaginative and largely unsightly, with only a decent shade of red to offer some meager relief from the otherwise mediocre motif.

Definitely on the low end for a 5 Hour Energy clone.  Now, as a disclaimer (for reasons that shall be seen) the last thing I did before opening this was to shake it like a boss.  First swig was a recognizable strawberry flavor, and I would have continued to enjoy it until I got to the end of the shot, at which point I got a whole mouthful of bitter ingredients.  Now, as I said, I shook this dang thing up pretty well before drinking it—but that didn’t do the trick, and the shot was all the worse for it.  So…if you plan on trying one of these against my advice, you might want to spend 10 minutes beforehand shaking it, because even appreciable vigor isn’t going to do the trick.

Perceptible, but rather weak—I did feel more alert, but that was the extent of it.

Two and a half hours.

This is a pretty pitiful effort at topping the most popular energy shot in the world.  It doesn’t taste as good (hard to manage), doesn’t kick nearly as well, and still costs about $2 per shot—whereas with an Eternal Energy shot, you get the same flavor with a better kick for 88 cents.  6 Hour Energy—Very Berry: you’ve failed miserably.  Get back to the drawing board and see if you can make something of yourself.