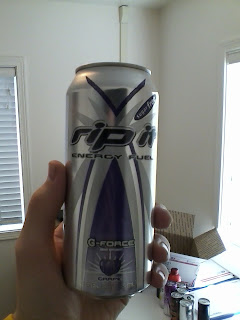 Well, finals are over—that’s the good news.  The bad news is the lack of sleep for the past couple of weeks have finally caught up with me; I am bedridden with a nasty fever.  In between sleeping, tossing/turning, drinking plenty of fluids (not the kind you’re thinking) and having fever dreams about building organic compounds (Shouldn’t happen to me, I’m done with o-chem!), I’ve decided to catch up on a couple of reviews of the drinks that have helped me stay alert the last little while.

As lackluster as any of them—cheap print job and cheesy design make this fit into Dollar Tree perfectly.

In times past, I’ve made no secret of my distain for Rip It energy drinks (and now shots).  In my last review of a Rip It drink, I noted that “the flavors all taste like they were brainstormed, selected, formulated, produced and shipped in the same five-minute time period, expending as little effort and creativity as humanly possible.”  That said, this drink is an exception.

This stuff tastes like…nostalgia.  It tastes like in the midst of formulating flavors like Power and Fruit Bomb, someone stopped and said, “You know, we should make an energy drink that tastes like the grape soda we loved so much when we were kids—but let’s knock off the calories and make it a little smoother, so it appeals to adults and not just 10-year-olds.”

So…just because I was one of those people who loved grape soda when I was younger, I appreciate what was done in Rip It—G-Force Sugar Free, enough that I just might drink it again on purpose at some point.

Not shabby—if you’re looking for a smooth, decent boost with minimal jitters for 99 cents, this might be up your alley.

Three and a half hours, sans crash—though I was quite ready for bed once this had worn off.

As far as energy drinks in general are concerned, this one’s alright—and definitely the best beverage of the Rip It line so far.  If you’re into grape soda and don’t want to spend a whole lot for your energy boost, I’d say this is right up your alley.