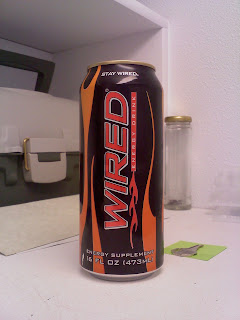 I see Wired products just about everywhere I go, though I never see them all in one place—a few here, a few there.  WinCo is by far the best source; I can probably get six or seven different varieties there, this being one of them.  That said, I am surprised that this, being the original (I use this term loosely—see “TASTE”) isn’t carried at more locations, but I still wouldn’t worry about availability—the stores where I’ve seen it tend to sell it in staggering quantities, such that you can easily buy it by the pallet.

For a bargain energy drink, Wired doesn’t have a bad look—even if the flames don't make make a whole lot of sense given the name of the drink (wouldn't lightning bolts be more appropriate for a drink called "Wired?").  Mostly, I like the way the colors come together—orange flames over black background, vertical red logo…I even like the way the muted brass color of the top of the can goes with the overall look.  So generic appearance aside, it works in its own right.

The fact that no flavor was specified on the can indicated to me that there was roughly a 95% chance that I was in for a Red Bull clone.  Sure enough, it was just that.  However derivative, it’s still a pleasant experience—it was on the Red Bull end of the spectrum as far as flavor is concerned (i.e. kind of sour and less sweet than Monster Energy), but it lacked the bitter aftertaste which I associate with Red Bull almost as much as the flavor.  So, in the end, it is an improvement over the original, for which it deserves some recognition.

It was kind of slow getting started, but once it got going, it worked relatively well—surprisingly well, in fact, given its low caffeine content and bare-bones energy blend (just some B-vitamins and inositol).  Before drinking, I was ready to slump face-first into my physiology textbook and sleep for the rest of the day—but I didn’t have that option, as I was cramming—I mean, reviewing—for a test to be taken that night.  Afterwards, I was reasonably and functionally awake, if not exactly…well, wired.

In addition to its reasonable intensity, Wired also boasted a noteworthy staying power, allowing me to stay awake long enough to finish studying and get the test out of the way.  I didn’t crash after the fact, either, which is a plus.

Don’t look for anything new or particularly exciting when you pick up Wired, but as far as bargain energy drinks go, this ain't half bad.  For a buck or so, you get a decent Red Bull-esque flavor and a kick that’s not too shabby.  What more need I say?