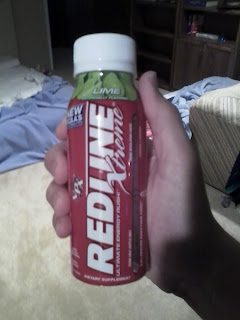 This is the first in a series of reviews of Redline energy drinks.  In this case, the review applies to the full bottle—which is something that won’t apply in subsequent reviews.  Read on for details.

Finding Redline products isn’t all that difficult, but it does help if you know where to look.  I find it’s more common at specialty chains like GNC and what not more than places like gas stations and Wal-Mart, though I have seen them on occasion at both of those.

Not a whole lot needs to be said here—design is about as basic as they come, but—it’s recognizable as a Redline beverage.  And in this case, that’s all that really counts.

When it comes to really serious energy drinks like this, taste is frequently a secondary consideration.  This is about what I expected when I cracked open the bottle and started sipping, and in some ways, that’s what I got.  The first half of the flavor experience is pleasant—it actually tastes like limeade.  The second half, however, you get a mouthful of bitter, medicinal, artificial sweetener-laden aftertaste—quite enough to turn me off.

Redline’s one of those drinks that I knew of well before I started reviewing energy drinks—in just about every circle in which energy drinks would be consumed, it’s reputation for singular potency precedes it.

Reading the proprietary blend listed on the back/side, I can believe it.  There are a number of ingredients in this drink that I haven’t seen in others, including an extract of the herb yohimbe, which is betimes employed in botanical circles as a treatment for erectile dysfunction.  A conversation I don’t particularly want to have:

ACQUAINTENCE: So, how’d that Redline work for ya?
ME:  IT GAVE ME ERECTIONS!!!

Anyway, recommended serving’s four ounces—so half the bottle.  I started off with that, and got a pretty decent buzz.  Then I decided, “You know what?  I think I could handle more.”  So…I went ahead and took down the rest of it, which turned out to be a mistake.  Redline’s a creeper—the effects aren’t immediately obvious, but build over the course of a half hour or so.  Once that time frame passed, I was left with a kick that was legitimately insane—I was bounding from task to task, wrapping up projects in about half the normal time just because it was so dang uncomfortable to sit still.

Trust me on this—four ounces will do you just fine.

So…as though it weren’t enough that it was so dang strong, the effects of the full bottle kept me going for about ten hours.  Yeah, you read right—ten hours of insane energy.  What on earth does anybody need to go that strong for that long for?  Unless you’re creating the heavens and the earth, I’ll say it once again­­—half a bottle will work just fine.

If you’re going to drink Redline, go ahead—but drink half the bottle.  I will be reviewing Redline beverages based on what the recommended serving delivers—because drinking the full eight ounces is just nuts.