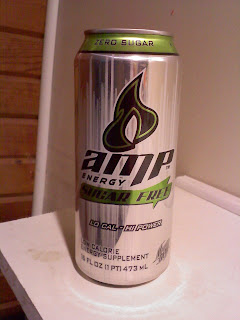 Amp Energy—Sugar Free is on the scarcer side of things.  The more I watch for it the less I seem to see it; I would advise that any desirous to satisfy their curiosity by trying it out pick it up sooner rather than later, before it vanishes altogether.

Due to the vast exposure of aluminum over the periphery of the can, Amp Energy—Sugar Free looks a bit bland, albeit not as much as it could gave been.  I do very much like the black flame and the shade of green employed here and would love seeing Amp do something more complete with this scheme in the future, but until then Sugar Free’s all we’ve got.

I found the taste of Amp Energy—Sugar Free to be curiously distinct from the original Amp Energy.  While the latter was principally passion fruit and orange flavored, the former reminds me more of the less-than-placeable citrus-ish taste of the original Mountain Dew, though it does taste slightly watered down and is overwhelmed a bit by the aftertaste of artificial sweeteners.  If you like Mountain Dew there is a chance you’ll like Amp Energy—Sugar Free, though the aforementioned artificial sweeteners are not skillfully employed here and may be a turn-off to some.

The kick was rather characteristic of the Amp Energy line; it kept me awake, though for most of the time I still could feel some degree of fatigue.  I found it useful for keeping me from falling asleep over my physiology studies, though for a long drive I’d probably go for something at least a bit stronger.

Amp Energy—Sugar Free actually surpassed my expectations in terms of longevity—while most Amp beverages tend to give out after an average of two hours, I got about 3½ before I felt tired enough that I could have slept had I needed to.

Well, it’s not spectacular, but by my standards Amp Energy—Sugar Free still does alright.  Health-conscious Mountain Dew lovers will be the most enamored by this beverage, though with the rest of us it will be more of a toss-up.