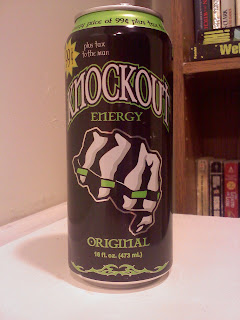 Places that carry this stuff are few and far between—I was fortunate enough to find a place that carried it about 15 minutes from where I live, but other than that, I haven’t found it terribly easy to come by.  Interestingly enough, visiting my wife’s grandparents (who live—I’m being dead serious here—in the middle of nowhere) I stopped by a few gas stations to get directions, and everywhere I went seemed to have it.

Knockout Energy advertises itself as sort of a bargain energy drink, and comes complete with a stamp advertising the pre-determined price of “99 cents.”  Overall, the look isn’t horrible—the can, with its black color, white fist, and green brass knuckles, was one of the first to catch my attention in a gas station refrigerator dominated by mainstream energy drinks.  At the same time, however, there are aspects of the packaging that seem to reflect efforts to curtail expenditures and thereby ensure the desired low price; examples being the actual name of the drink (does “Knockout” sound like a drink that you’d trust to keep you awake?), the flavor (the green trim and the designation of the flavor as “Original” leads me to a 99.99% surety that the drink is yet another Red Bull clone, hardly original and highly indicative that neither thought nor effort were placed into the flavor), and the stamp itself (I’m all for a bargain energy drink, but I do not believe that the yellow sunburst stamp is the way to advertise it; it really looks cheap).

Rant as I may about the recurrence of the Red Bull flavor in the energy drink world, I still like the taste.  This is as good as any Red Bull clone as you’ll find on the market (i.e. about equal to the original Monster Energy, though inferior to Monster Energy—Import) and with the price, it may be one of the few that manages to find a significant target demographic.

The kick delivered was fairly lackluster; it was just enough to keep me from falling asleep, but far from enough to really wake me up.  Needless to say, it left me feeling rather unimpressed.

The effect produced by the drink lasted a decent while; however, given the tame nature of the kick, it wasn’t the most agreeable state of awakedness I’ve ever experienced.  Also worthy of note was the crash after the fact, which left me feeling more wrung-out and drained than simply tired.

En fin, Knockout Energy receives a passing grade, though I found the entire experience to be dishearteningly ordinary.  Even if I have to admit that I like the traditional energy drink flavor, I’m tired of getting it half the time I open a can of something I haven’t tried before; and the kick amounted to an experience that was quite unimpressive.  If you have to try it or if it’s the cheap energy drink you’ve always been looking for, go for it; otherwise you really aren’t missing anything by passing it over.