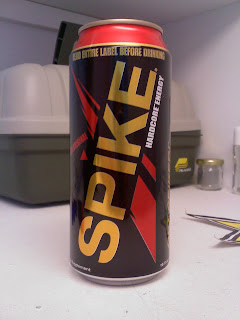 Like so many of the energy drinks I’ve acquired lately, this is one I’ve only seen once, and that was at a 7-Eleven in Richland, Washington.  Unless my experience is not representative, you’re going to need to look long and hard before you find this.

This is one of the more effective designs I’ve ever seen on a can—the name of the drink boldly displayed diagonally front and center, jagged spikes in the background, warning labels on just about every available surface…even the color scheme seems to scream that this stuff means some serious business.  Truth be told, the whole getup has an almost intimidating look to it, which I consider to be appropriate, given the exceptionally potent nature of the drink.

The taste was mostly strawberry-oriented, with some red raspberry in the mix.  The sweetener blend used in the drink was not at all disagreeable, though the aftertaste stuck around a little while.  There’s a high level of carbonation to the stuff, also, which made it so that it wasn’t exactly the smoothest thing in the world going down.  The end result is about average on the “agreeable” scale.

Yeah, yeah, I know I’ve committed to limiting myself the 1-10 scale for taste and kick (or 0-10, since Rockstar 2X got a rating of “0” for taste), but HOLY HUMPIN’ HANNAH, THIS IS SOME FREAKIN' HARDCORE STUFF!  I don’t know how else to describe it.  I was rarely sitting still so as to get the full effect of it, seeing as I was too busy moving trying to expend all the energy by moving virtually all the furniture out of my brother and sister-in-law’s apartment single-handedly.  Whenever I would be standing still, I was shaking so badly and was so beyond jittery that it was actually alarming.  The drink earns all the warning labels that they stick on the can—this is not a drink to be trifled with or drunk casually.

Again with the out-of-range rating on the drink…alright.  Let me give you some idea of how long-lasting the effects of the drink are.  I drank this at roughly 3:00 P.M.; by 3:15 P.M. the shakes had already began.  Went over and started moving; was done by 8:30 P.M., after which the physical exhaustion of doing so much for so long had already set in.  Does that mean I was crashing?  No.  It was about 12:30 A.M. before I could manage to get to sleep.  That’s about nine and a half hours of effectiveness.  Nothing I’ve had before even begins to compare.

So as you can see, I haven't given an overall rating to Spike Hardcore Energy—The Original.  The reasoning for this is the fact that the rating system is flawed to an extent, in that there are certain things that it doesn’t take into account but often need to be set forth.  For example: Venom Energy—Death Adder is, in my mind, the finest energy drink I’ve had to date.  It gets a 9.33 out of 10, so just short of perfect.  The score, however, does not take into account the sheer quality of the beverage—the kick the drink managed to produce, though not the most intense I’ve had, was still an experience that was second to none, producing a level of alertness and functionality that most drinks tend to fall short of or overshoot, contenting themselves with either mediocrity or excess.  The same principle applies here—the rating does not take into account the fact that this drink is supremely and unnecessarily potent.  We are at the point where discussing the taste is inane, and where there's really no sense in giving it a rating out of 10 for effectiveness.  All you really need to know about it is that it is powerful to the point of brutality, and for this reason, I do not recommend it unless you have a physiology that renders you all but impervious to the effects of caffeine and need something that will keep you awake, or, if it’s the only option you have, don’t go and down the entire can.  It is definitely not your standard energy drink, and should not be treated as such, but with due respect and caution with regards to the exceptionally high caffeine content it possesses.

Looking over this review, it seems more like a public service announcement than a review.  Oh, well.  So be it.