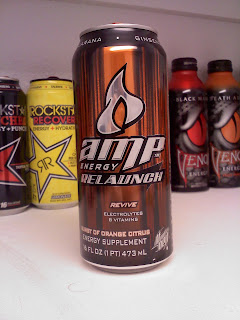 For the most part of my energy drink career, this was pretty easy to find.  Maybe less so than the others, all of which are available en masse just about anywhere, but still…finding a can of the stuff wasn’t anything they’d make an Indiana Jones movie out of.  Learned recently, however, that the drink had been discontinued.  Needless to say, I ran out and grabbed a can as soon as I could, and by then, the supply was spread fairly thin.  However available it was back in its prime, you can definitely expect to see much less of this in the future.

The presentation of orange on the Amp Energy motif is actually relatively pleasing.  It actually has kind of a Halloween-themed look to it—even though the orange flavor has nothing to do with Halloween, really.  But hey, there’s an idea…a Halloween or autumn-themed energy drink.  Energy wassail, maybe?  It would definitely cover the taste of the caffeine itself….

The taste isn’t great, but not bad either—kind of like orange Jell-O.  I'll leave it at agreeable, especially compared to some of the orange-flavored sodas out on the market, which I am not in the least fond of.

I found this drink to be a little kickier than most of the Amp Energy line.  No jitters, just a reasonable degree of effectiveness.

I didn’t have any problems with the effects of the drink wearing off before I needed to, and there was no crash that I could hold against it.  What more need I say?

Personally, had I been in a position of authority in the Amp Energy company, I’d have opted to discontinue Amp Energy—Elevate rather than this one, just because of how unimpressed I was with the former.  But, what’s done is done, and Amp Energy has discontinued one of the better drinks I’ve had from them.  I doubt that anybody will read this review in time to give it a shot on my recommendation, but if you do—grab it now, while you have the chance, otherwise you’ll probably have missed your last window of opportunity.