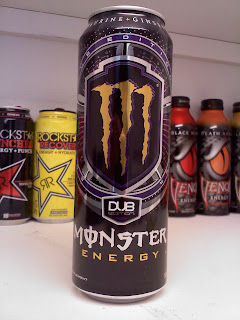 Monster Energy—Dub Edition isn’t the easiest of the Monster line to come by; I’m only aware of a few places (at least around here) that regularly keep it in stock.  Keep your eyes open long enough and you should be able to find it, but plan on being patient as you do. 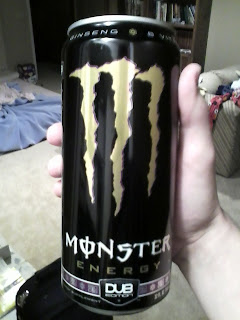 If you’ve ever seen it, you know that the design for Monster Energy—Dub Edition is pretty tight; it's very quick to catch the eye, and once it has your attention, it holds it.  The can features the iconic Monster M in purple and gold surrounded by a some sort of shield/wheel design over a black background—really, my description doesn't really do it justice, but for that you have the picture.  Also, I have to say I love the twist-top can that they introduced with Monster Energy—Import, and I'm glad they stuck it on this product as well.

The first of sip tasted almost exactly like the original Monster Energy (no surprises there) with a hint of grape.  This wasn’t too bad, but it does taste a heck of a lot sweeter than the other Monster products.  By the time I was a third of the way through the can, the sweetness had already started to get old, and from there things went downhill.  Approaching the finish line was hard; at that point each sip was almost making me sick.  Nice thought, but the sweetness rendered this one almost undrinkable.

Given the similarities between this drink and Monster Energy—Import, I was expecting the kick to be of a stout sort than what I actually got.  There was a kick, to be sure, but only enough to recognize it as the phenomena that was supposed to be keeping me awake—it was a mild jolt at best, just enough to keep me awake but not enough to make me not feel sleepy.  When all is said and done, it might be alright for studying or something else of the sort, but I'd recommend that anyone that's going to be behind the wheel pass this over and pick something you know for sure will work.

It was hard for me to tell when the kick started to taper off, as it wasn't especially strong to begin with.  It lasted for a time, but I remember that it wasn't the longest time before I staying awake was as difficult as it was before I drank the stuff.

There was nothing about this size of Monster Energy—Dub Edition that makes me feel especially inclined to recommend it.  I had a hard time with the taste, and I disliked how weak the kick was and that said kick gave out on me so much more quickly than I needed it to.  In the end, the payoff that you get from downing the entire can isn’t worth the price.  It’s better suited for display than it is for providing any sort of serious energy experience.

When people think “energy drink,” I guarantee you something like what you experience with the 32 oz. Dub Edition comes to mind—big can, big caffeine, and big energy.  If you can’t see what’s coming before you down this BFC monster, I’d venture a guess and say you were blind.  For the sake of such, however, I will say that you can expect a massive energy boost out of this thing.

Massive boost lasted the better part of five hours, with a surprisingly light crash considering what you took in.

If you like Dub Edition, there’s no reason you shouldn’t drink the BFC—assuming you can find it; took me forever to track down a can that wasn’t on ebay.