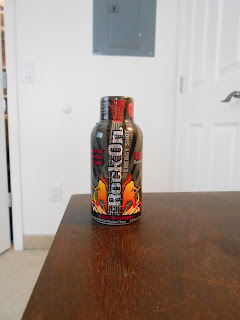 Been a while since I’ve reviewed an energy shot, and you know what?  I’m pretty okay with that.  As I’ve said in times past, for the most part I don’t like energy shots, and I’m perfectly content with this being primarily an energy drink blog.  Nevertheless, these have been sitting on my shelf for a while, and I figure it’s about time I get them reviewed.  To see if it makes any difference in the normally horrible flavor, I’ve decided to try this lot of 5 Hour clones (the predictability is one thing I don’t like about them) on ice.

Not given—‘equal to a cup of the leading premium delicious awesome bad*** coffee.’  I’d guess about 100 mg.  Not all that much.

Exclusive to Walgreens stores, which are most everywhere except really small towns—even Rexburg’s not so small that it doesn’t have a Walgreens.

You know, I know these are 5 Hour clones and everything, and it’s kind of sad, because they at least look like they could be next-level, really good energy shots.  I know it’s too much to hope, but with the sparkly text, the guitarists, the black and grey sunburst background, and the frankly attractive wrapping job—all the stuff that looks to me like effort—it’s enough to make me at least want to believe.

So now we come to the moment of truth—does ice actually help the taste of these bitter, nasty 5 Hour clones?  The answer, in this case, is yes—it doesn’t make it pleasant per se, but it’s still light years ahead of what I experience with most clones.  That said, in this instance the effect is also extremely unusual—are you familiar with the aroma of Yankee Candle’s Red Berry and Cedar?  No?  One of my favorite scents, actually…but anyway, I don’t know how else to explain it, but Rock On—Pomegranate tastes like the smell of that candle.  Like red berries and cedar.  It is a strange experience to be sure, and one I’m really not certain if I can recommend or not—are energy shots supposed to taste beautiful-smelling candles, or is that just plain wrong?

It took about 15 minutes to get going, but let me tell you, once those 15 minutes had passed, I was…awake.  Not jittery, not even particularly alert.  Just awake, nothing more, nothing less; and let me tell you, I expect way more out of an energy product than this.  8.4 oz. Red Bull beverages (including the spectacularly delicious Blue Edition) deliver a boost that’s light years ahead of this in terms of useful energy, and that with only 80 mg of caffeine and a mix of B-vitamins—that being the case, why on earth would you settle for something like this?  Furthermore, if Red Bull’s minimalist blend works so well, how on earth do you wind up with something so unsatisfactory?

Well, the ice might have made a difference in terms of the flavor, but as far as buzz is concerned, this shot is definitely a bust.  Just avoid it altogether if you’re even remotely concerned with the utility of your shot.