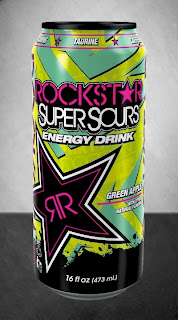 Sometimes I wonder why I bother with this section, because I hardly get around to revising it once the drinks have gained ground…in any event, for the time being this isn’t the most common beverage in the world (I can only find it at my favorite energy drink haunt around here), but give it a month or so and it’ll be everywhere.

I don’t like the look of this one quite as much as Bubbleberry—whereas the latter made me feel unabashedly nostalgic, this one doesn’t do quite as much for me.  It’s still a flashy, well-designed can, and nothing worthy of scorn.

I should have known that “Super Sours” would be an exaggeration—can you imagine drinking a 16 oz. old-school (they’re much weaker now) Mega Warhead?  In any event, this lack of any excessive tartness on the drink’s part doesn’t bother me so much as the unenthused feeling I got out of the flavor.

Now, green apple is one of my all-time favorite flavors.  I can load up exclusively on green apple Jelly Bellys at WinCo and be perfectly content, and my memories of green apple Gatorade from my childhood are a part of some of my fondest childhood memories (involving hanging out Saturday mornings with my Dad), so few beverage prospects have the potential to excite me more than that of green apple.

Unfortunately, this drink squanders said potential and settles with a pretty lackluster flavor.  The green apple taste is quite recognizable, but it’s kind of a mid-intensity Jolly Rancher, and in addition is overly sweet not quite sour enough (so it’s not the lack of excessive tartness that bothers me, it’s the fact that it’s so imbalanced towards the sweet end of things).

Most might not have the same problems I do; I imagine the undiscriminating energy drinker will be just fine with it.  But if you really love your green apple, you might be a little affronted by this.

Like most new Rockstar beverages with the 240 mg of caffeine, this one has kick to spare.  If you love your boosts intense and with substantial jitters, this might be the way to go—though I prefer the smoother effects of Zero Carb and Recovery Energy/Tea/Lemonade.

Five hours, with not as much crash as you would think—but then again, that might just be the fact that I skipped dinner before going to work, so I was running on this for energy (and by that I mean metabolic fuel—not just alertness).  Not a good idea, but that’s beside the point.

So many people are psyched over these new drinks that I’m almost sad to report that they’re a little overhyped.  The kick is good (if a bit ragged for my liking), but in keeping with their heavily sugared drinks, there’s plenty left to be desired in the flavor department.  However, if you liked the taste of Bubbleberry, I imagine you’ll be just fine with this one.