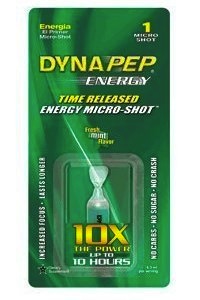 Dynapep isn’t typically found in very good company.  I got mine at a local grocer’s, but I see it very frequently in those behind-the-counter displays at gas stations that contain products like “Libi-Grow” or “Shlong-a-Tron”…you know, those displays.  Off the subject, how do you suppose insecure guys go about asking the tattooed chick behind the counter to pass them a packet of Shlong-a-Tron?

There are all sorts of things wrong about this product.  The biggest one is the flavor—but I’m getting ahead of myself.  First thing that comes to my mind when I look at one of these is, “Okay…world’s first microshot…but why?”  I can understand if you’re just looking for a portable way to get energy—but you could just grab a bottle of (delicious) black cherry-flavored Mio and get several servings out of it, rather than carrying around this clunker of a protective cardboard card that houses a miniscule bottle with a single serving in it (all for just a buck more—yes, this mini-abomination of a shot costs you a full $2.50 for ONE fix).  The bottle’s another problem—it’s tiny, its flimsy, it’s apparently soluble in the dang liquid, and when you open it, the only opening you have to get this liquid out is a pore so small it almost qualifies as a gap junction.  But as I stated—the biggest issue you’re going to have is drinking it, even if it’s only—what, 2 mL?

This stuff tastes like some sort of industrial cleaner—strong, harsh, and flat-out vile (it would be appropriate to rename it “Dynapep Energy—Chemical Wash”).  What’s the point in doing the whole “world’s first microshot” thing if consumers can’t even stomach the dang stuff?

Let’s not leave it at that, though—no, no, no, no, no, that would be letting it off far too easy.  Let’s go over what went wrong here, step by step.  The first and most obvious thing is that it tastes like something that we would use in an organic chemistry lab—and when the first thing that comes to mind when you taste something is “gasoline additives,” you’ve got problems with your formula!  Second is the fact that it also tastes like it’s been eating at the plastic, as it’s the second very prominent thing you taste—noting that what you’re drinking dissolves plastic is also a problem!  Lastly, you can’t taste any mint—and no, it didn’t mysteriously show up after I rinsed my mouth out, as the berry did.  False advertising—problem!  Let’s propose a second name—“Dynapep Energy—Caffeinated Petroleum Distillates.”  Yes, that raises eyebrows, but at least it tastes true.

For all your trouble, you get some decent energy.  No, I would not for a second recommend that you drink it for it, but if you happen to be some alien organism that runs off of hydrocarbons, you can anticipate some pretty solid alertness and an increased inclination towards physical exertion.

As with the berry flavor, this will last you a total of four hours (hence the whole "time release" thing)—the nice thing being you feel the full effects during that time, the not-nice thing is that afterwards you feel practically comatose.

Good energy, seriously nasty shot.  Not worth it on any level.  Avoid, or better—fill up your gas tank with it, and keep somebody from drinking them.  You’re pretty much guaranteed a Nobel Prize for that sort of goodness towards your fellow men.