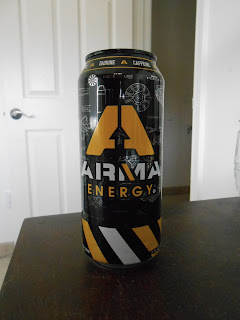 A special thanks goes out to Caffeine King, gentleman, reviewer, and linguist extraordinaire for selecting this drink for his end of a trade.  For excellent energy drink reviews and an excellent opportunity to expand your vocabulary, his site receives my wholehearted recommendation.

Also, this drink marks review #400 since I started this site up a few years back.  It’s come a long way since then, thanks to readers and fellow reviewers who were willing to add links to my site from theirs and give it a boost.  Don’t think it isn’t greatly appreciated.

As indicated, I received this drink in a trade—and, as it turns out, it’s been discontinued.  So if this review piques your curiosity, drop Arma a line and tell them to bring it back.  I wouldn’t mind that at all.

At first glance, Arma has one of the best packaging jobs I’ve ever seen— with bold alternating white and yellow striping and lettering, this looks like something that would fit right in at a nuclear facility.  The lines in the background looked to me a lot like circuitry, a touch I considered to be a work of genius—then I saw that those lines were blueprints/outlines of different armaments, and I confess I was a little put off.  So a few points for not being the genius I initially believed it to be, but other than that Arma still holds its own remarkably well in the looks department.

I actually received this can in the mail back in January (I think), and at that time we were experiencing one of the coldest winters in decades.  So this thing had been sitting in my mailbox overnight in subzero temperatures when I finally got my hands on it—thank heaven for the sugar keeping it from freezing, or I would have been a grumpy man.  Anyway, you haven’t had an energy drink cold before you’ve had it like I had this mothersucker—and let me tell you, it was quite an experience.  To top it all off, it was really good.  The flavor is almost straight pineapple, with maybe a bit of passionfruit or something else adding some nuances of flavor there.  Think what Rockstar would be like if it focused more on the pineapple flavor, got more sour and lost the bitterness (note: I gushed about the original Rockstar in my initial review, but it has since fallen out of favor in my sight…probably should rewrite that review to reflect my current sentiments).  It’s an excellent drink to be sure, and one I’m sorry I probably won’t get a chance to enjoy again.

In the 400 products I’ve reviewed, I’ve come to favor smoother, low-calorie beverages above just about any other energy product out there.  Still, it is dang nice every once in a while to be able to enjoy a drink in the same way I enjoyed the beverages that first got me into reviewing—just a jittery, sugary blast of formidable energy.  There is nothing whatsoever that’s healthy about this beverage, but once in a while (especially before the gym, as I drank this), there’s nothing wrong with that.  Sometimes you just need to get freaking wired, and for that, Arma is an excellent choice—or was.

I got a solid four hours of jitters out of this before I reached a point that would most certainly have been considered a crash had I not burnt the sugar off at the gym.  Well played, Arma.

As you can probably tell, I’m not exactly happy that this is no longer available, but I sure as heck enjoyed the can I had.  It tasted great and kicked in a way few of its peers kick—more of a guilty pleasure than a functional beverage, but one that loses the guilt quickly in the rush.