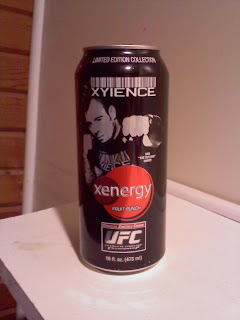 Drinks in the Xenergy Xtreme line are fairly hard to come by, this one being no exception—I actually had to have a friend of mine bring this can from out of state, if that tells you anything about its availability.

The packaging for this particular Xenergy drink is the same as ‘em all, with the exception of the large graphic of UFC fighter Dan “The Outlaw” Hardy with his fist in a punching gesture.  This will probably do more for UFC fans than it did me—I don’t think it really added anything by being there.

One thing that’s always impressed me about Xenergy products is their tendency to taste almost exactly like the real thing—Xenergy Cran Razz Premium tasted like cranberries and raspberries, Xenergy Xtreme Cherry Rush tasted like cherries…you get the idea.  Well, with Xenergy Xtreme Fruit Punch, it tastes like your run-of-the-mill fruit punch drink—which tastes fake.  I mean, there is obviously some blend of fruits that is used to make it, but this particular drink tastes as vague and homogenized as any of ‘em.  Not a bad drink per se, but Xyience is capable of so much more than this.

Xenergy Xtreme Fruit Punch isn’t as powerful as most, but it is still quite effective, enough to deliver some moderate jitters and significant alertness.

While I found that the high point of alertness didn’t last as long with Xenergy Xtreme Fruit punch as it did some others, a reasonable degree of efficacy remained that lasted a decent while.  I got about 3½ hours of passable energy out of it before I crashed and took a nap.

Overall, Xenergy Xtreme Fruit Punch wasn’t a negative experience, but it was still pretty dang ordinary, and I’m not used to ordinary when it comes to Xyience’s products.  If you’d like to give it a shot, you’ve really got nothing to lose in trying it—but then again, you won’t really gain much out of it, either.